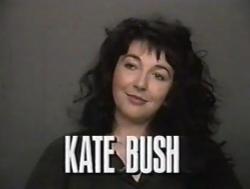 Short interview feature in the MTV programme 120 Minutes, in which artists like Sisters of Mercy, New Order, Red Hot Chili Peppers and Laurie Anderson were presented in a few minutes. Although 120 Minutes was broadcast on MTV from 1986 to 2013, the X-Ray segment only existed between 1986 and 1991.

On 12 February 1990, X-Ray was devoted to Kate Bush. In a short interview she talked about wanting to communicate through her music instead of interviews and the power of music.