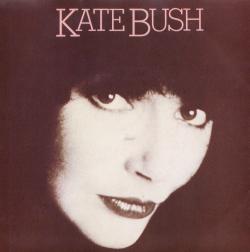 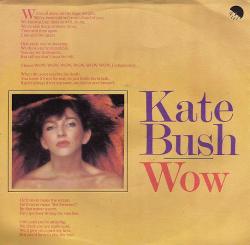 Song written by Kate Bush. Originally released on her second album Lionheart, it was issued as the album's second single on 9 March 1979. According to Kate, the song was about the music business and show business in general.

'Wow' was released as a 7" single in various territories. The Canadian single featured a unique sleeve and was pressed on transparent yellow vinyl.

There are two versions of the studio recording of 'Wow': the album version and the single version. The single version is an edited version of "Wow", although it is not labelled as such on most editions. On all European "Wow" singles, the first 12 seconds of synthesiser chords have been removed. There was also a live version from Hammersmith Odeon.

Kate Bush made a guest appearance on the TV Special ABBA in Switzerland, where she performed this song in April 1979.

The music paper Sounds seemed a little underwhelmed by 'Wow': "I hear this mediocre chanteuse crooning her way through this silly song. (...) I realise that a lot of people would like to go to bed with her, but buying all her records seems a curious way of expressing such desires." Meanwhile, The Guardian called 'Wow' the "undisputed highlight" of the Lionheart album. "An eerie gentle number with perceptive lyrics. The verses still sound a little muddled but get better with playing" said Record Mirror. And Melody Maker added: "The most precisely focused Kate Bush single since Wuthering Heights despite the self-indulgent lush production."

'Wow' was sampled in a track by Ellis Dee.

I've really enjoyed recording 'Wow'. I'm very, very pleased with my vocal performance on that, because we did it a few times, and although it was all in tune and it was okay, there was just something missing. And we went back and did it again and it just happened, and I've really pleased with that, it was very satisfying. (Lionheart Promo Cassette, EMI Canada, 1978)

'Wow' is a song about the music business, not just rock music but show business in general, including acting and theatre. People say that the music business is about ripoffs, the rat race, competition, strain, people trying to cut you down, and so on, and though that's all there, there's also the magic. It was sparked off when I sat down to try and write a Pink Floyd song, something spacey; Though I'm not surprised no-one has picked that up, it's not really recognisable as that, in the same way as people haven't noticed that 'Kite' is a Bob Marley song, and 'Don't Push Your Foot On The Heartbrake' is a Patti Smith song. When I wrote it I didn't envisage performing it - the performance when it happened was an interpretation of the words I'd already written. I first made up the visuals in a hotel room in New Zealand, when I had half an hour to make up a routine and prepare for a TV show. I sat down and listened to the song through once, and the whirling seemed to fit the music. Those who were at the last concert of the tour at Hammersmith must have noticed a frogman appear through the dry ice it was one of the crew's many last night 'pranks' and was really amazing. I'd have liked to have had it in every show. (Kate Bush Club newsletter, Summer 1979)

We're all alone on the stage tonight.
We've been told we're not afraid of you.
We know all our lines so well, uh-huh.
We've said them so many times:
Time and time again
Line and line again

Ooh, yeah, you're amazing!
We think you're incredible

You say we're fantastic
But still we don't head the bill

When the actor reaches his death,
You know it's not for real. He just holds his breath
But he always dives too soon, too fast to save himself

Ooh, yeah, you're amazing!
We think you are really cool
We'd give you a part, my love,
But you'd have to play the fool