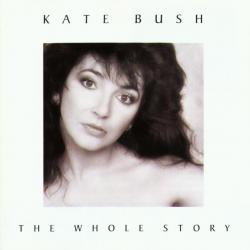 Roger Holland in Sounds (UK): "Over the last nine years and five albums, Kate Bush (...) has matured into quite the most sensual, expressive, and creative artist this country can now boast". Colin Irwin, Melody Maker (UK): "This glorious retrospective collection... she's playing a high-risk game, and more often than not her irrepressible flair, her instinct for a hook, and her gift for unusual and gripping arrangements carry her through." John McReady, NME (UK): "More useful and more enjoyable than the constipated jangling of a hundred and one little lads with big mouths and even bigger clothes allowances. Such people are not worth a carrot. Meat or no meat, Kate Bush is streets ahead." Andy Strickland, Record Mirror (UK): "A monumental tribute to this craziest, coziest girl-next-door. (...) One of the most refreshing compilation LPs it would be possible to put together."

Kate about 'The Whole Story'

Yes, I was [against the release of a compilation album] at first. I was concerned that it would be like a "K-tel" record, a cheapo-compo with little thought behind it. It was the record company's decision, and I didn't mind as long as it was well put together. We put a lot of work into the packaging, trying to make it look tasteful, and carefully thought out the running order. And the response has been phenomenal - I'm amazed! (Kate Bush Club newsletter, Issue 22, December 1987)

It wasn't chronological because we wanted to have a running time that was equal on both sides, otherwise you get a bad pressing. In America, where I'm not very well known, they didn't realise it was a compilation! ('Love, Trust and Hitler'. Tracks (UK), November 1989)