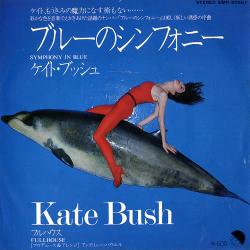 Song written by Kate Bush in 1978, released on her second album Lionheart. It was one of three newly written songs for the album, along with Coffee Homeground and Full House. It is believed that the lyric of the song is an attempt at describing Kate's own belief system. The descriptions of God, sex and the colour blue seem to be inspired by reading about Wilhelm Reich's theory in A Book Of Dreams.

'Symphony In Blue' was released as a single in Canada and Japan. In Canada, the B-side was Hammer Horror; in Japan it was Fullhouse.

Kate performed 'Symphony In Blue' during the live shows of the Tour of Life. The song also appeared in the 1979 Christmas special.

Kate about 'Symphony In Blue'

It was inspired by Erik Satie's Gymnopedies.

I spent a lot of my time looking at blue,
The colour of my room and my mood:
Blue on the walls, blue out of my mouth;
The sort of blue between clouds, when the sun comes out,
The sort of blue in those eyes you get hung up about.

When that feeling of meaninglessness sets in,
Go blowing my mind on God:
The light in the dark, with the neon arms,
The meek He seeks, the beast He calms,
The head of the good soul department.

I see myself suddenly
On the piano, as a melody.
My terrible fear of dying
No longer plays with me,
for now I know that I'm needed
For the symphony.

I associate love with red,
The colour of my heart when she's dead;
Red in my mind when the jealousy flies,
Red in my eyes from emotional ties,
Manipulation, the danger signs.

The more I think about sex, the better it gets.
Here we have a purpose in life:
Good for the blood circulation,
Good for releasing the tension,
The root of our reincarnations.

I see myself suddenly
On the piano, as a melody.
My terrible fear of dying
No longer plays with me,
for now I know that I'm needed
For the symphony.

I spent a lot of my time looking at blue--
No wonder that I blue it!