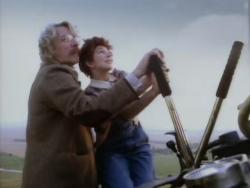 Born as Donald McNichol Sutherland in Saint John, New Brunswick (Canada) on 17 July 1935.He obtained his first part-time job, at the age of 14, as a news correspondent for local radio station CKBW. After quitting the London Academy of Music and Dramatic Art (LAMDA), Sutherland spent a year and a half at the Perth Repertory Theatre in Scotland. In the early to mid-1960s, Sutherland began to gain small roles in British films and TV.

In 1985, Donald Sutherland agreed to play the part of Wilhelm Reich in Kate's music video for Cloudbusting. He did so in a few days off in the middle of filming the movie 'Revolution'.

Inductee of Hollywood Walk of Fame and Canadian Walk of Fame, he also received a Canadian Academy Award for the drama film 'Threshold' (1981). Several media outlets and movie critics describe him as one of the best actors who has never been nominated for an Oscar. In 2017, it was announced he will receive an Academy Honorary Award for his contributions to cinema.

He is the father of actors Rossif Sutherland, Angus Sutherland and Kiefer Sutherland.

Barry Richardson, who was the hairdresser on Nic Roeg’s 'Don't Look Now', asked me if I’d do a music video with Kate Bush. I told him no and we went on to other conversations. A couple of days later there was a knock on my door. I lived in the Savoy Hotel (in London). On the river. Suite 312. I loved it there. So cosseted. So private. Only the floor butler rang the door. I opened it. There was no one there. I heard a voice saying hello and I looked down. Standing down there was a very small Kate Bush. Barry had told her where I lived. What can you do? She wanted to explain what her video was about. I let her in. She sat down, said some stuff. All I heard was ‘Wilhelm Reich’. I’d taken an underground copy of his 'The Mass Psychology of Fascism' with me when I went to film (Bernardo) Bertolucci’s 'Novecento' in Parma. Reich’s work informed the psychological foundations of Attila Mellanchini, the character Bernardo had cast me to play. Everything about Reich echoed through me. He was there then and now he was here. Sitting across from me in the person of the very eloquent Kate Bush. Synchronicity. Perfect. She talked some more. I said OK and we made ‘Cloudbusting’. She’s wonderful, Kate Bush. Wonderful. I love that I did it. (What do I remember) about doing it? I remember being in the car and the hill and them taking me, taking Reich, away and looking back through the back window of the car and seeing her, seeing Reich’s son Peter, standing there. And I remember the first morning on set seeing her coming out of her trailer smoking a joint and I cautioned her, saying she shouldn’t smoke that, it’d affect her work, and she looked at me for a second and said she hadn’t been straight for nine years and I loved her. (Alex Denney, 'The story behind Kate Bush's Cloudbusting video'. Dazed, 30 October 2015.)