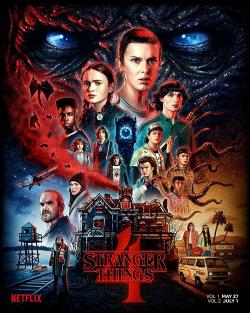 Publicity poster for the fourth season of 'Stranger Things'

Stranger Things is an American science fiction horror drama television series created by the Duffer Brothers and streaming on Netflix. The brothers serve as showrunners and are executive producers along with Shawn Levy and Dan Cohen. The first season of the series was released on Netflix in 2016, with new seasons in 2017, 2019 and 2022. A fifth and final season will follow.

Set in the 1980s in the fictional town of Hawkins, Indiana, the series initially focuses on the investigation into the disappearance of a young boy (Will Byers) amid supernatural events occurring around the town, including the appearance of a girl with psychokinetic abilities (Eleven). The Duffer Brothers developed Stranger Things as a mix of investigative drama alongside supernatural elements portrayed with horror, science fiction and childlike sensibilities. Setting the series in the 1980s, the Duffer Brothers infused references to the pop culture of that decade while themes and directorial aspects were inspired by the works of Steven Spielberg, John Carpenter, Stephen King and H. P. Lovecraft.

In the fourth season in 2022, Kate Bush's Running Up That Hill was featured on several episodes, especially in a key moment on the fourth episode involving Max Mayfield (Sadie Sink), with more to come in later episodes. Apparently Kate granted the producers of the show permission to use the song after understanding the intent and vision meant for the song, because she’s fan of the series.

When the first series came out, friends kept asking us if we’d seen ‘Stranger Things’, so we checked it out and really loved it. We’ve watched every series since then, as a family. When they approached us to use Running Up That Hill, you could tell that a lot of care had gone into how it was used in the context of the story and I really liked the fact that the song was a positive totem for the character, Max. I’m really impressed by this latest series. It’s an epic piece of work – the shows are extremely well put together with great characters and fantastic SFX. It’s very touching that the song has been so warmly received, especially as it’s being driven by the young fans who love the shows. I’m really happy that the Duffer Brothers are getting such positive feedback for their latest creation. They deserve it. (Kate Bush press release, 6 June 2022)