She's Having A Baby 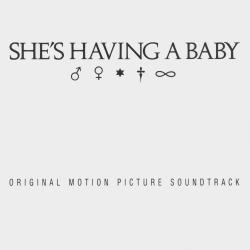 She's Having a Baby is an American romantic comedy film directed and written by John Hughes, released in cinemas on 5 February 1988.

The film portrays a young newlywed couple, Kristy and Jake Briggs played by Elizabeth McGovern and Kevin Bacon, who try to cope with being married and what is expected of them by their parents. Jake must also deal with the fantasy woman of his dreams. The film is about traditional 1980s suburban life and the cultural expectations that come along with it. To a large extent what Jake experiences could be described as a form of culture shock, with his best man Davis (Alec Baldwin) as a reminder of his former culture as a single man, and feeling alienated when he overhears his neighbors converse about mundane suburban topics. He feels he has left the culture of single men, and has entered the culture of a married man, and doesn't appear to have a sense of belonging to either. Jake feels pressure, from society and from his wife, to have a child. He doesn't know what he wants. The couple begins a program to assist their efforts to become pregnant, which eventually succeed. They inform their parents of this, and while all are overjoyed, Kristy's mother casually informs them that she had a difficult birth with Kristy and nearly died. The movie culminates with a traumatic yet eventually successful labor and Jake's realization that his lack of satisfaction and sense of detachment are not due to external factors but his own selfishness and immaturity. Jake is called into Kristy's hospital room, worried, but she smiles at him, stating that she wanted to be the one to tell him that they have a son.

Critical reception was mostly negative, and the film was not a financial success.

The song during the birth sequence is Kate's song This Woman's Work, which is also featured on her 1989 album The Sensual World.