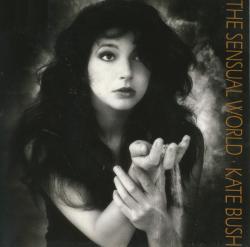 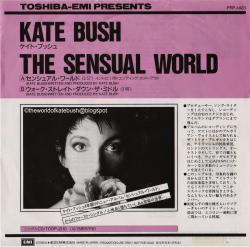 Still from the music video for 'The Sensual World'

Song written by Kate Bush. Originally released as a single by EMI Records on 18 September 1989. Also released on her sixth album The Sensual World. Bush was inspired to write the song after hearing Irish actress Siobhan McKenna read the closing soliloquy from James Joyce's 'Ulysses', where the character Molly Bloom recalls her earliest sexual experience with husband-to-be Leopold Bloom. The book was published in 1922. Kate, believing the text had fallen to public domain, simply lifted parts from it and sang them on the backing track she'd created. She approached director Jimmy Murakami to make a video for the song, and he expressed doubts because he suspected James Joyce's grandson Stephen James Joyce had the rights to the book. Kate then contacted him numerous times, but the Joyce estate refused to release the words. She spent over a year trying to gain permission before accepting defeat.
In the end, she kept the backing track but "re-approached the words", writing a lyric that sounded a lot like the original text but also added the dimension of 'stepping out of the page / into the sensual world', in effect Molly Bloom stepping out of the book and walking into real life.

Musically, one of the main hooks in the chorus of The Sensual World was inspired by a traditional Macedonian piece of music called 'Nevestinsko Oro' ('Bride's Dance'). A recording of this piece of music was sent to Kate by Jan Libbenga. As in the traditional version, the melody is played on uilleann pipes, in this case by Irish musician Davy Spillane.

'The Sensual World' was released as a 7" single, a 12" single, a cassette single and a CD-single. In Germany, a 3" CD-single was also released. On all formats, the bonus track Walk Straight Down The Middle was included, plus - on all formats except the 7" single and the cassette single - an instrumental version of 'The Sensual World'. It was, incidentally, the last Kate Bush song to be released on 7" vinyl in Japan.
The 12" vinyl release of the single had a double-grooved A-side so that either the song or an instrumental version of the song would be played depending on where the needle was placed. Mastering engineer Ian Cooper later recalled that Kate didn't tell the record company about this. Some 12" singles were returned when buyers thought the vocals had disappeared. "She just did it for a laugh, and it worked. Eventually, EMI had to put a sticker on it", according to Cooper.

There are two versions of 'The Sensual World': the album version and the instrumental version. The song was re-recorded for the album Director's Cut after Bush had finally acquired permission from the Joyce estate to use the text from 'Ulysses'. This version was called Flower Of The Mountain.

The video, which features Bush dancing through an enchanted forest in a medieval dress, was co-directed by The Comic Strip co-creator Peter Richardson and Bush herself.

Kate about 'The Sensual World'

Because I couldn't get permission to use a piece of Joyce it gradually turned into the song about Molly Bloom the character stepping out of the book, into the real world and the impressions of sensuality. Rather than being in this two-dimensional world, she's free, let loose to touch things, feel the ground under her feet, the sunsets, just how incredibly sensual a world it is. (...) In the original piece, it's just 'Yes' - a very interesting way of leading you in. It pulls you into the piece by the continual acceptance of all these sensual things: 'Ooh wonderful!' I was thinking I'd never write anything as obviously sensual as the original piece, but when I had to rewrite the words, I was trapped. How could you recreate that mood without going into that level of sensuality? So there I was writing stuff that months before I'd said I'd never write. I have to think of it in terms of pastiche, and not that it's me so much. (Len Brown, 'In The Realm Of The Senses'. NME (UK), 7 October 1989)

The song is about someone from a book who steps out from this very black and white 2-D world into the real world. The immediate impressions was the sensuality of this world - the fact that you can touch things, that is so sensual - you know... the colours of trees, the feel of the grass on the feet, the touch of this in the hand - the fact that it is such a sensual world. I think for me that's an incredibly important thing about this planet, that we are surrounded by such sensuality and yet we tend not to see it like that. But I'm sure for someone who had never experienced it before it would be quite a devastating thing. (...) I love the sound of church bells. I think they are extraordinary - such a sound of celebration. The bells were put there because originally the lyrics of the song were taken from the book Ulysses by James Joyce, the words at the end of the book by Molly Bloom, but we couldn't get permission to use the words. I tried for a long time - probably about a year - and they wouldn't let me use them, so I had to create something that sounded like those original word, had the same rhythm, the same kind of feel but obviously not being able to use them. It all kind of turned in to a pastiche of it and that's why the book character, Molly Bloom, then steps out into the real world and becomes one of us. (Roger Scott, Interview. Radio 1 (UK), 14 October 1989)

There's a few songs that have been difficult to write. I think the most frustrating and difficult to write was the song, 'The Sensual World'. Uh, you've probably heard some of the story, that originally it was written to the lyrics at the end of 'Ulysses', and uh, I just couldn't believe how the whole thing came together, it was so... It was just like it was meant to be. We had this sort of instrumental piece, and uh, I had this idea for like a rhythmic melody, and I just thought of the book, and went and got it, and the words fitted - they just fitted, the whole thing fitted, it was ridiculous. You know the song was saying, 'Yes! Yes!'. And when I asked for permission, you know, they said, 'No! No!' That was one of the hardest things for me to swallow. I can't tell you how annoyed I was that, um, I wasn't allowed to have access to this great piece of work that I thought was public. And in fact I really didn't think you had to get permission but that you would just pay a royalty. So I was really, really frustrated about it. And, um... kind of rewrote the words, trying to keep the same - same rhythm and sounds. And, um, eventually, through rewriting the words we also changed the piece of music that now happens in the choruses, so if they hadn't obstructed the song, it would have been a very different song. So, to look at it positively, although it was very difficult, in the end, I think it was, it was probably worth all the trouble. Thank you very much. (Kate Bush Con, 1990)

A lot of people have said it's sexy. That's nice. The original piece was sexy, too; it had an incredible sensuality which I'd like to think this track has as well. I suppose it is walking the thin line a bit, but it's about the sensuality of the world and how it is so incredibly pleasurable to our senses if we open up to it. You know, just simple things, like sitting in the sun, just contact with nature. It's like, for most people, their holidays are the only time they get a real burst of the planet! (Will Johnson, 'A Slowly Blooming English Rose'. Pulse (UK), December 1989)

Then I'd taken the kiss of seedcake back from his mouth
Going deep South, go down, mmh, yes,
Took six big wheels and rolled our bodies
Off of Howth Head and into the flesh, mmh, yes,

He said I was a flower of the mountain, yes,
But now I've powers o'er a woman's body, yes.

To where the water and the earth caress
And the down of a peach says mmh, yes,
Do I look for those millionaires
Like a Machiavellian girl would
When I could wear a sunset? mmh, yes,

And how we'd wished to live in the sensual world
You don't need words--just one kiss, then another.