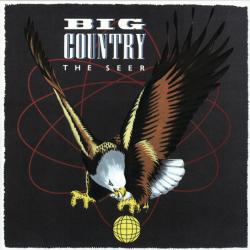 Song written by Stuart Adamson and recorded by his band Big Country on their album 'The Seer', which was released by Mercury Records on 23 June 1986. The track features Kate Bush on backing vocals. According to Stuart: "The Central character of the song "The Seer" is a woman, so I thought it would be good to get a woman's vocal point of view. I have a lot of Kate Bush albums, and I like her voice. She varies it so much. There's a lot of variety and texture in the way she sings, and she's always coming up with something different. She's a perfectionist; she won't give up until she's absolutely satisfied with what she's done. She has a lot of dedication."

In another interview with the band at the time of the album's release, they added: "We'd done the song and one of our mates, a guy called Davy Duncan who used to play and sing in a band called The Shaking Pyramids, put down Barrad which is a sort of ethnic Scottish-Irish type hand-held drums - and it gave it a sort of folky feel, along with the mandolins and the sitars. We thought 'this song needs girl vocals on it' and Stuart immediately thought 'why don't we get Kate Bush?' We said there's only one way to do it and that's phone her management. They said that Kate would do it but she'd like to hear a cassette of the song first. So we sent a cassette there and she liked the song and she worked out her parts for the song, orchestrating them really well. Then she came to the studio and did them, it took her about twelve hours to do and it was just great, it was fantastic. I think the woman is just a complete genius. She was very shy. I think we were quite awestruck as well when she walked in. Tony was like 'Oh, hello Kate, would you like a cup of coffee, would you like a glass of orange juice?', running about saying things like that. I think we were quite shy, she was quite shy as well. But she was good fun, she's got a good sense of humour as well. She's got a very 'Comic Strip' type of sense of humour which we immediately identified with and after that it was a great time."

Long ago I heard a tale I never will forget
The time was in the telling on the bank the scene was set
The sky was rolling blindly on, the daylight had not gone
She washed her hair among the stones and saw what was to come
All this will pass
There will be blood among the corn and heroes in the hills
But there is more to come my boy before you've had your fill
Men will come and rape the soil as though it were their own
And they will bathe their feet in oil as I have bathed my own

Stones will stand together as if searching for the stars
And all come crashing down again before they reach too far
She turned to face the setting sun, I turned to walk away
But then she called my name again and beckoned me to stay

She told me of the famous sons who write their names in peace
Yet be cut down before the time has come for our release
Just as I tell you here
Even now I wait for the coming day
Even now she waits in the dawn
For the tales she tells, for the gifts that she will sell
For the sight she knows, for a vision that still grows
With the dream in her eyes no one's seen

Even now I wait for the coming day
Even now she waits in the dawn
For the tales she tells, for the gifts that she will sell
For the sight she knows, for a vision that still grows
With the dream in her eyes no one's seen