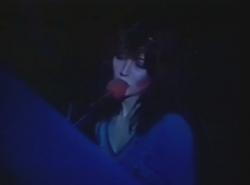 Song written by Kate Bush, released on her debut album The Kick Inside. Originally the song was recorded as a demo produced by David Gilmour in June 1975.

'Saxophone Song' was not released as a single. However, a playable postcard featuring the song was released in Poland.

Kate performed 'Saxophone Song' during the Tour of Life live shows in 1979.

I wrote 'The Saxophone Song' because, for me, the saxophone is a truly amazing instrument. Its sound is very exciting - rich and mellow. It sounds like a female. (Dreaming: The Kick Inside, 1978)

The song isn't about David Bowie. I wrote it about the instrument, not the player, at a time when I really loved the sound of the saxophone - I still do. No, I don't know him personally, though I went to his "Farewell to Ziggy Stardust" concert and cried, and so did he. (Kate Bush Club newsletter, November 1979)

You'll find me in a Berlin bar,
In a corner brooding.
You know that I go very quiet
When I'm listening to you.

The candle burning over your shoulder is throwing
Shadows on your saxophone, a surly lady in tremor.
The stars that climb from her bowels,
Those stars make towers on vowels.