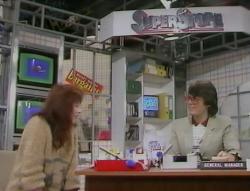 Saturday Superstore was a children's television series, broadcast on BBC1 from 1982 until 1987. It was shown on Saturday mornings with presenters including Mike Read, Sarah Greene, Keith Chegwin and John Craven. The show was very similar to its predecessor Multi-Coloured Swap Shop, which had ended the previous October – March season following its presenter Noel Edmonds moving away from children's TV to present his prime time Late Late Breakfast Show.

A regular spot on the show was their children's talent show 'Search for a Superstar'. Amongst its most memorable moments were the pop group Matt Bianco being verbally abused by a phone-in caller and The Flying Pickets offering as a competition prize a tea-towel bearing the face of Karl Marx. Other notable guests included Wham!, who answered questions about their lives to callers and read out competition answers and winners. Then Prime Minister Margaret Thatcher appeared in one show in 1987 leading up to that year's election campaign, making the newspaper headlines when she was repeatedly asked by a girl "where will you be if nuclear war breaks out?".

Kate Bush appeared on the show aired on 2 October 1982 for an interview by Mike Read.