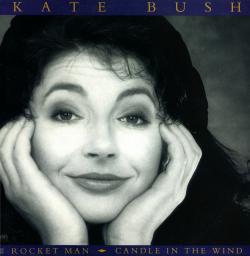 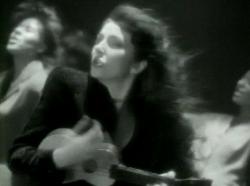 Still from the music video for 'Rocket Man' 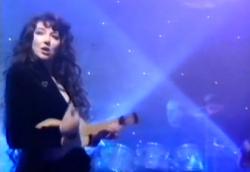 Song written by Elton John and Bernie Taupin. Originally released on Elton John's album Honky Château, it was released as a single on 14 April 1972 and became a hit in the UK and the USA, as well as several European countries.

Kate Bush recorded a cover of the song in 1989 as a track for the album Two Rooms, which was released two years later. it was subsequently released as a single from that album on the Mercury label on 25 November 1991.

A black and white music video was filmed with her band as a simple performance video, with Kate playing a ukulele, apparently as a tribute to Marilyn Monroe in the movie 'Some like it hot'. Alan Murphy, who had died since recording his guitar part on 'Rocket Man', was given a nod by filming a guitar on a chair at some points in the video.

Kate performed 'Rocket Man' on the BBC television programme Wogan on 16 December 1991. She appeared with her own band and playing a ukelele, lipsynching the song.

From the age of 11, Elton John was my biggest hero. I loved his music, had all his albums and I hoped one day I'd play the piano like him (I still do). When I asked to be involved in this project and was given the choice of a track it was like being asked 'would you like to fulfill a dream? would you like to be Rocket Man?'... yes, I would. (Two Rooms liner notes, 1991)

I was really knocked out to be asked to be involved with this project, because I was such a big fan of Elton's when I was little. I really loved his stuff. It's like he's my biggest hero, really. And when I was just starting to write songs, he was the only songwriter I knew of that played the piano and sang and wrote songs. So he was very much my idol, and one of my favourite songs of his was 'Rocket Man'. Now, if I had known then that I would have been asked to be involved in this project, I would have just died… They basically said, 'Would we like to be involved?' I could choose which track I wanted… 'Rocket Man' was my favourite. And I hoped it hadn't gone, actually – I hoped no one else was going to do it… I actually haven't heard the original for a very long time. 'A long, long time' (laughs). It was just that I wanted to do it differently. I do think that if you cover records, you should try and make them different. It's like remaking movies: you've got to try and give it something that makes it worth re-releasing. And the reggae treatment just seemed to happen, really. I just tried to put the chords together on the piano, and it just seemed to want to take off in the choruses. So we gave it the reggae treatment. It's even more extraordinary (that the song was a hit) because we actually recorded the track over two years ago. Probably just after my last telly appearance. We were quite astounded when they wanted to release it as a single just recently. (BBC Radio 1 interview, 14 December 1991)

I remember buying this when it came out as a single by Elton John. I couldn’t stop playing it - I loved it so much. Most artists in the mid seventies played guitar but Elton played piano and I dreamed of being able to play like him. Years later in 1989, Elton and Bernie Taupin were putting together an album called Two Rooms, which was a collection of cover versions of their songs, each featuring a different singer. To my delight they asked me to be involved and I chose Rocket Man. They gave me complete creative control and although it was a bit daunting to be let loose on one of my favourite tracks ever, it was really exciting. I wanted to make it different from the original and thought it could be fun to turn it into a reggae version. It meant a great deal to me that they chose it to be the first single release from the album.
That meant I also had the chance to direct the video which I loved doing - making it a performance video, shot on black and white film, featuring all the musicians and... the Moon!
Alan Murphy played guitars on the track. He was a truly special musician and a very dear friend. Tragically, he died just before we made the video so he wasn’t able to be there with us but you’ll see his guitar was placed on an empty chair to show he was there in spirit. (KateBush.com, February 2019)

She packed my bags last night pre-flight
Zero hour nine a.m.
And I'm gonna be high as a kite by then
I miss the earth so much I miss my wife
It's lonely out in space
On such a timeless flight

Mars ain't the kind of place to raise your kids
In fact it's cold as hell
And there's no one there to raise them if you did
And all this science I don't understand
It's just my job five days a week
A rocket man, a rocket man