Rock Around The World 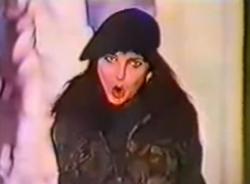 Kate Bush performing 'Army Dreamers' in Rock Around The World, 1980

TV programme on the Australian SBS network, presented by Basia Bonkowski. She described herself as a music fan rather than an expert.

The idea for the programme was first mooted to Bruce Gyngell, then head of the SBS 0/28 network, shortly after the station began broadcasting at the end of 1980. An unsuccessful pilot was made, and a year later the programme went to air. Originally airing on Friday nights, the success of the show saw it eventually aired as four half-hour shows running Monday to Thursday. Producer Bernie Cannon said at the time that the show “wanted to show the local kids that good music was occurring in other places like Holland, quite amazing stuff from West Germany, France, Japan and South America: that it was a universal language among the youth”.

Kate Bush appeared on the programme in October 1980 with a lipsynched performance of Army Dreamers.