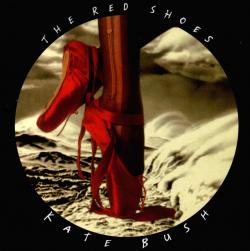 Seventh album by Kate Bush, released by EMI Records on 2 November 1993. The album was written, composed and produced by Kate.

The album was inspired by the 1948 film of the same name by Michael Powell and Emeric Pressburger. The film in turn was inspired by the fairy tale of the same name by Hans Christian Andersen. It concerns a dancer, possessed by her art, who cannot take off the eponymous shoes and find peace. Bush had suggested she would tour for the album and deliberately aimed for a "live band" feel, with less of the studio trickery that had typified her last three albums (which would be difficult to recreate on stage). However, the tour never happened in the end. A few months after the release of the album, Bush did release The Line, The Cross and the Curve, a movie incorporating six tracks from the album.

Most notably, The Red Shoes featured many more high-profile cameo appearances than her previous efforts. Comedian Lenny Henry provided guest vocals on Why Should I Love You, a track that also featured significant contributions from Prince. And So Is Love features guitar work by Eric Clapton and Jeff Beck. Gary Brooker (from the band Procol Harum) appears on two tracks as well.

The album was recorded digitally, and Bush has since expressed regrets about the results of this, which is why she revisited seven of the songs using analogue tape for her 2011 album Director's Cut.

The album consists of the following tracks:-

NME wrote: "How many of us could stand the self-imposed exile that has been the adult life of Kate Bush. She's elevated privacy to an art-frm... it's her most personal album to date, yet it is her most accessible, in which the listener can identify directly with the pain she's trying to pull herself through..."  The Independent on Sunday added: "There is nothing here that quite compares with her most splendid songs - 1980's Breating and 1986's The Big Sky... but The Red Shoes is a triumph nonetheless...". The Observer: "Bush's most pensive album yet... its mood of wistful mystery maintained by elaborate arrangements... the occasional number is overwrought, but the best confirm Bush as an artist of substance."

Kate about 'The Red Shoes'

I've been very affected by these last two years. They've been incredibly intense years for me. Maybe not on a work level, but a lot has happened to me. I feel I've learnt a lot – and, yes, I think [my next album] is going to be quite different… I hope the people that are waiting for it feel it's worth the wait. (BBC Radio 1 interview, 14 December 1991)