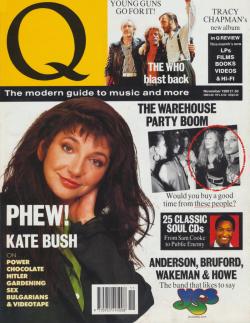 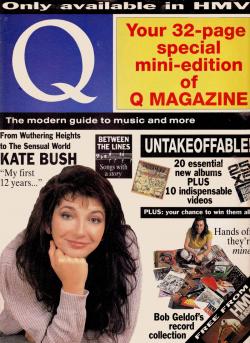 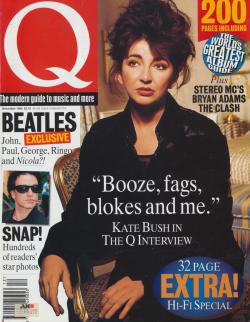 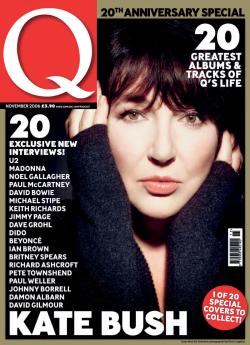 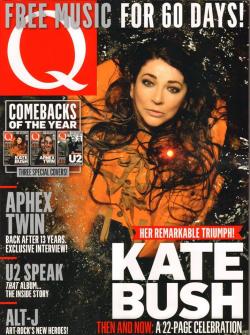 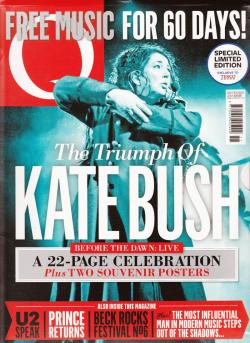 Monthly magazine about popular music, published monthly in the United Kingdom. The magazine Q was founded in 1986 by Mark Ellen and David Hepworth, who were dismayed by the music press of the time, which they felt was ignoring a generation of older music buyers who were buying CD's — then still a new technology. In the early years, the magazine was sub-titled "The modern guide to music and more". Originally it was to be called Cue (as in the sense of cueing a record, ready to play), but the name was changed so that it wouldn't be mistaken for a snooker magazine.

The magazine has an extensive review section, featuring new releases (music), reissues (music), music compilations, film and live concert reviews, as well as radio and television reviews. Much of the magazine is devoted to interviews with popular musical artists. Often, promotional gifts are given away, such as cover-mounted CDs or books.

Kate Bush has been featured on the cover of the magazine on five different occasions. The November 1989 issue featured an eight page article on the occasion of the release of her sixth album The Sensual World.
In 1990, a special issue of Q was produced for HMV shops, with Kate on the front page. Inside, there was a five page article.
When she appeared on the cover of the December 1993 issue, the magazine included a six page article with an exclusive interview.
When Q magazine celebrated its 20th birthday, the November 2006 issue was released with twenty different covers. One of them featured Kate Bush. All of the twenty featured artists appeared in the magazine with a short, but exclusive interview of two pages.
And finally, the November 2014 issue - in shops over a month earlier - came in three different covers, one of which featured Kate Bush, who was performing live in London at the time. Inside the magazine no less than 22 pages were devoted to Kate, including a retrospective of her career and a review of her first live date of the Before the dawn shows on 27 August 2014. The 'Kate Bush version' was also available with a different cover exclusively in Tesco shops in the UK.

The Q Awards were first organized in 1990. Since then, the Q Awards have become one of Britain's biggest and best publicised music awards. During her career, Kate has received one Q Award for 'Classic Songwriter' in 2001. She attended the ceremony, too, receiving the award from Midge Ure. After her Before the Dawn shows in 2014, she controversially didn't win a Q Award, becoming runner up behind the band Kasabian instead.