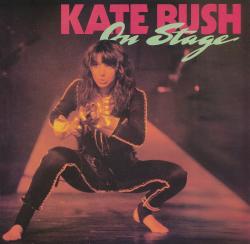 On Stage is a live recording of four songs performed on Kate Bush's Tour of Life, recorded at Hammersmith Odeon on 13 May 1979 and released on 31 August 1979. It is her only official live performance on vinyl. (60 minutes of the concert were finally made available on CD in 1994 as Live at Hammersmith Odeon.) The songs included are Them Heavy People, Don't Push Your Foot On The Heartbrake, James And The Cold Gun and L'amour Looks Something Like You.

In the UK, EMI Records initially chose to release 'On Stage' as two 7" vinyl records packaged in a cardboard gatefold sleeve. This edition was quickly superseded by a single disc version, which crammed all 4 tracks onto one 7" vinyl record, with a 33RPM speed rather than 45RPM. The single was packaged in a gatefold sleeve, although later editions were packaged in a 'regular' cardboard sleeve, like it was in most other territories. Only in Portugal a two 7" vinyl set was released commercially as well.
The record was released on 12" vinyl and cassette in many countries.

A promotional video was made for "Them Heavy People", showing Bush against a black background with the two dancers from her live shows.