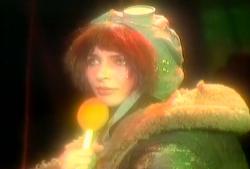 Song written by Kate Bush. Originally released on her second album Lionheart. Kate later all but disowned the song, labelling it as 'embarraassing'.

Kate performed 'Oh England My Lionheart' during the Tour of Life as the first encore of the evening. Dressed in an old, oversized flying jacket and air helmet, she sung the song on a set inspired by old war films like 'A Matter Of Life And Death' and 'Reach For The Sky'. Her dying comrades lay around the stage. The coat belonged to David Jackson, set designer on the Tour of Life, and according to him "she was naked underneath it. Somebody found that out and offered me £1000 for it but I turned him down. He was so besotted that he wanted to buy the coat. I was so besotted myself that I wouldn't sell it to him!"

Kate about 'Oh England My Lionheart'

It's really very much a song about the Old England that we all think about whenever we're away, you know, "ah, the wonderful England'' and how beautiful it is amongst all the rubbish, you know. Like the old buildings we've got, the Old English attitudes that are always around. And this sort of very heavy emphasis on nostalgia that is very strong in England. People really do it alot, you know, like "I remember the war and...'' You know it's very much a part of our attitudes to life that we live in the past. And it's really just a sort of poetical play on the, if you like, the romantic visuals of England, and the second World War... Amazing revolution that happened when it was over and peaceful everything seemed, like the green fields. And it's really just a exploration of that. (Lionheart Promo Cassette, EMI Canada, 1978)

A lot of people could easily say that the song is sloppy. It's very classically done. It's only got acoustic instruments on it and it's done ... almost madrigally, you know. I dare say a lot of people will think that it's just a load of old slush but it's just an area that I think it's good to cover. Everything I do is very English and I think that's one reason I've broken through to a lot of countries. The English vibe is very appealing. (Harry Doherty, Enigma Variations. Melody Maker, November 1978)

Oh England, my Lionheart,
I'm in your garden, fading fast in your arms.
The soldiers soften, the war is over.
The air raid shelters are blooming clover.
Flapping umbrellas fill the lanes--
My London Bridge in rain again.

Oh England, my Lionheart!
Peter Pan steals the kids in Kensington Park.
You read me Shakespeare on the rolling Thames--
That old river poet that never, ever ends.
Our thumping hearts hold the ravens in,
And keep the tower from tumbling.

Oh England, my Lionheart!
Dropped from my black Spitfire to my funeral barge.
Give me one kiss in apple-blossom.
Give me one wish, and I'd be wassailing
In the orchard, my English rose,
Or with my shepherd, who'll bring me home.