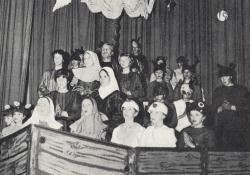 The cast of 'Noye's Fludde', with a young Kate on the left

One act opera, created by the British composer Benjamin Britten. It was first performed on 18 June 1958 at the Aldeburgh Festival. The story is based on the 15th-century Chester "mystery" or "miracle" play which recounts the biblical story of Noah, the flood and the ark. Britten specified that the opera should be staged in churches or large halls, not in a theatre. At its premiere Noye's Fludde was acclaimed by critics and public alike, both for the inspiration of the music and the brilliance of the design and production. The opera received its American premiere in New York in March 1959, and its first German performance at Ettal in May 1959. Since then it has been staged worldwide. The opera was largely intended for amateur performers, particularly children.

Kate performed in the opera while she was attending St. Joseph's Convent Grammar School. Although the school had a free-thinking atmosphere, there was a rigid system of discipline and a formal attitude typical of Grammar Schools. Art was considered a 'crummy subject', but the school did have a busy calendar of events. When Noye's Fludde was staged in Kate's first year, she played the part of a mouse, wearing a papier-mâché mouse's head.