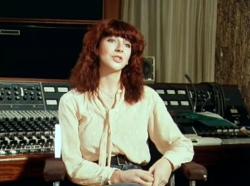 Kate Bush interviewed in Nationwide in 1979 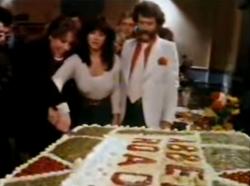 Nationwide is a former BBC News and current affairs television programme which ran from 9 September 1969 until 5 August 1983. It was broadcast on BBC 1 each weekday following the early evening news, and included the regional opt-out programmes. The programme followed a magazine format, combining political analysis and discussion with consumer affairs, light entertainment and sports reporting.

A 25 minute documentary about the Tour Of Life was broadcast in Nationwide on 3 March 1979. There are brief interview sections featuring Kate, her brothers John Carder Bush and Paddy Bush, and her dance instructor and co-choreographer Anthony Van Laast. At the end of the film Kate is interviewed in a recording studio where she is working on her third album, Never For Ever.

Kate appeared in the programme again on 29 April 1980, being interviewed by Sally James about her new music video for Breathing, of which the beginning and end are shown.

On 13 November 1981, Nationwide had a report about Abbey Road's 50th anniversary, in which Kate Bush is shown alongside Helen Shapiro, cutting the cake.

As a contemporary programme Nationwide was only recorded on broadcast videotape in the event of possible complaint or litigation; after a period of time tapes would be wiped and re-used although filmed reports were archived. Consequently, only a few complete editions exist in their original form. Remarkably, the programmes from between 1971 to 1980 have survived as a virtually complete collection, mostly on Sony and Shibaden tapes, but on Philips for the programmes after 1977. This collection is held by the NFA (National Film Archive) and represents the only copies of the complete programmes in existence. The British Film Institute website stated in 2003 "so far we have successfully dubbed 500 [Philips] N-1500 [tapes] as part of an HLF-Funded Nationwide preservation project". In November 2016 the BFI's holdings of Nationwide, described as being on an "exceptionally rare" video format, were included in a list of 100,000 most at risk television episodes which were to be digitised following £13.5m of National Lottery funding.