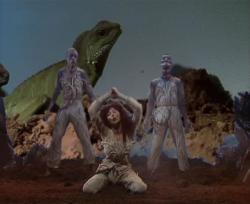 Television show, broadcast on the German ZDF channel between 1982 and 1987. The show was presented by Thomas Gottschalk. It was a mixture of talk and music show around the "normal madness" of everyday life. The 45-minute broadcast was first broadcast on Mondays, then Wednesdays, and finally on Saturdays from 7.30 pm to 8.15 pm.

Thomas Gottschalk received the Golden Gong for this show in 1983 and the Golden Camera in 1985. When Gottschalk quit the show in 1987 to assume the presentation of the rivalling show 'Wetten Das', 'Na Sowas!' was continued as 'Na Siehste', presented by Günther Jauch.

Kate Bush appeared on 'Na Sowas!' on 27 September 1982 for a lipsynched performance of The Dreaming. After her performance Gottschalk presents to her a gold disc for her previous album Never For Ever.