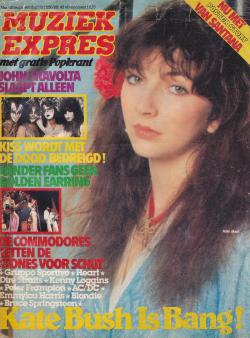 Dutch music magazine, first published in January 1956. Initially the magazine appeared in black and white; from June 1963 onwards there were also pages in colour. Until the mid-1970's Muziek Expres was the most popular music magazine in the Netherlands, with its record of a 375.000 printing run  in 1974. Owner and published Paul Acket, who was also a concert promotor, sold the magazine for millions to publisher VNU. With the money he started the North Sea Jazz Festival.

Although the magazine regularly reinvented itself, the magazine's popularity waned, with only 137.000 copies in 1979 and 77.000 in 1989. VNU decided to quit publishing the magazine: in December 1989 the 645th and last issue was released.

Kate Bush appeared in Muziek Expres between 1978 and 1985. She appeared on the cover of the magazine two times: in November 1978 and October 1980. She also appeared three times on posters included with the magazine.