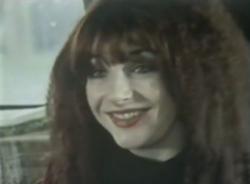 On 7 March 1979, Kate Bush appeared on this news magazine on TV in the UK. It was a report about Keith "Keef" MacMillan's work, including the making of the music video for Wow. This brief film focuses primarily on the rise of a then-new phenomenon: the promotional music video. Kate predicts a great future for the laser video disc, before the home video cassette market had yet taken off.

The film shows how the video for 'Wow' was made, with Kate being wired and hoisted up into the air, as well as one or two brief shots of Kate rehearsing the lip-synch.