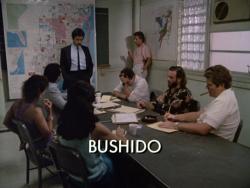 Title frame of the episode Bushido

Unlike standard police procedurals, the show drew heavily upon 1980s New Wave culture and music. The show became noted for its integration of music and visual effects.

In the eighth episode of the second season, entitled 'Bushido', a portion of Kate's song Hello Earth was used. The episode premiered on 22 November 1985.

Michael Mann directed a film adaptation of the series, which was released on July 28, 2006.