Man With The Child In His Eyes (the) 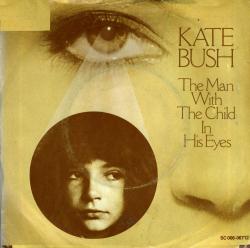 The Man With The Child In His Eyes - Dutch 7" sleeve 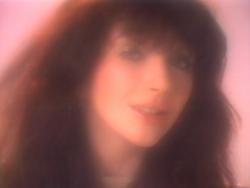 Song written by Kate Bush, released on her debut album The Kick Inside. Bush wrote the song when she was 13 and recorded it at the age of 16. It was recorded at Air Studios, London in June 1975 under the guidance of David Gilmour. She has said that recording with a large orchestra at that age terrified her. The song received the Ivor Novello Award for "Outstanding British Lyric" in 1979.

'The Man With The Child In His Eyes' was released as the second single from the album on 26 May 1978. In the United States the single was released in December of the same year. It became her first single to reach the Billboard Pop Singles chart, peaking at number 85 early in 1979.

A simple but effective music video was made to support the release of the single. Accoring to Kate: "Yes, that probably was the simplest one [Video] we've ever done. Again, the song dictated it, it was a very intimate song about a young girl almost voicing her inner thoughts, not really to anyone, but rather to herself. And it just started off where I sat down on the floor, crosslegged, and getting ready to work out some ideas to the routine with the music on. And my brother Jay came in and saw me sitting there and said, 'Why don't you just keep it like that?' (Razzmatazz, 1981)

There are two versions of the song: the album version and a single version. On the single, the song opens with the phrase “he’s here!” echoing.

Bush performed this song in her one appearance on Saturday Night Live, singing on a piano being played by Paul Shaffer. The single version slightly differs from the album version.

There is also an Italian translation, which is called Domani Dimenticherai, recorded by Zenima.

The song was sampled by Salt Tank on their track 'Swell'.
A bootleg remix was released by Mighty High.

Kate about 'The Man With The Child In His Eyes'

The inspiration for 'The Man With the Child in His Eyes' was really just a particular thing that happened when I went to the piano. The piano just started speaking to me. It was a theory that I had had for a while that I just observed in most of the men that I know: the fact that they just are little boys inside and how wonderful it is that they manage to retain this magic. I, myself, am attracted to older men, I guess, but I think that's the same with every female. I think it's a very natural, basic instinct that you look continually for your father for the rest of your life, as do men continually look for their mother in the women that they meet. I don't think we're all aware of it, but I think it is basically true. You look for that security that the opposite sex in your parenthood gave you as a child. (Self Portrait, 1978)

I just noticed that men retain a capacity to enjoy childish games throughout their lives, and women don't seem to be able to do that. ('Bird In The Bush', Ritz (UK), September 1978)

Oh, well it's something that I feel about men generally. [Looks around at cameramen] Sorry about this folks. [Cameramen laugh] That a lot of men have got a child inside them, you know I think they are more or less just grown up kids. And that it's a... [Cameramen laugh] No, no, it's a very good quality, it's really good, because a lot of women go out and get far too responsible. And it's really nice to keep that delight in wonderful things that children have. And that's what I was trying to say. That this man could communicate with a younger girl, because he's on the same level. (Swap Shop, 1979)

I hear him, before I go to sleep
And focus on the day that's been
I realise he's there,
When I turn the light off and turn over

Nobody knows about my man
They think he's lost on some horizon
And suddenly I find myself
Listening to a man I've never known before,

Telling me about the sea,
All his love, 'til eternity

He's very understanding,
And he's so aware of all my situations
And when I stay up late,
He's always waiting, but I feel him hesitate

Oh, I'm so worried about my love
They say, "No, no, it won't last forever"
And here I am again, my girl,
Wondering what on Earth I'm doing here
Maybe he doesn't love me
I just took a trip on my love for him