Magician Of Lublin (the) 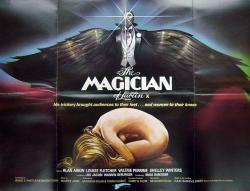 'The Magician Of Lublin' film poster

1979 film co-written and directed by Menahem Golan. The film is based on the novel 'The Magician Of Lublin' by Isaac Bashevis Singer. In the story, Yasha Mazur (played by Alan Arkin) is a turn-of-the-20th-century Jewish stage magician, conman and mystic. He tours through eastern Europe for his show while at the same time destroying his own career progressively through his personal problems. Nearly everywhere he goes, Yasha has a local girlfriend, from the youthful Zeftel (Valerie Perrine), to the feisty Elizabeta (Shelley Winters). His burned out manager/impresario Wolsky (Lou Jacobi) arranges for him to have one more chance at theatrical success, which requires that he pull off the trick of a lifetime in a Warsaw theater.

The title song The Magician was performed by Kate Bush.

The film was a box office and critical failure. Time Out London: "Golan's treatment, with its mixture of art house pretensions and vulgarity, founders at precisely those points where it departs from Isaac Bashevis Singer's original Yiddish novel. Where that used clear-eyed tender realism to point toward ambiguity of experience and mystery, Golan overdramatises, tips into hysteria, and substitutes a specious mysticism that is sadly literal."