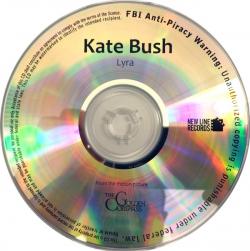 Song written by Kate Bush. Originally released on the 2007 soundtrack album 'The Golden Compass' from the film of the same name. It is used in the closing credits of the film. Bush was commissioned to write the song, with the request that it make reference to the lead character, Lyra Belacqua.

According to Del Palmer, Bush was asked to do the song on very short notice and the whole project was completed in 10 days. The song was produced and recorded by Bush in her own studio, and features the Magdalen College, Oxford choir. It contains the introduction of an unused song written for Disney's film 'Dinosaur' (2000).

The song was nominated for the International Press Academy's Satellite Award for original song in a motion picture.

'Lyra' was released on the soundtrack CD for 'The Golden Compass' only. However, a promotional CD-single was issued in the USA, featuring only one track.