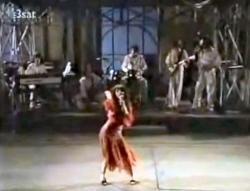 Song written by Kate Bush. 'Kite' was released as the B-side of Kate Bush's debut single Wuthering Heights and subsequently included on her debut album The Kick Inside as track 4.

There are two officially released versions of 'Kite': the album version and the live version from Hammersmith Odeon. However, a demo version from 1977 has also surfaced and was released on various bootleg cd's.

'Kite' was performed on television once. Kate performed the song live on Bio's Bahnhof, recorded in Germany on February 9, 1978, which was Kate's television debut. The song was also included in the setlist for the Tour of Life shows.

'Kite' has been covered by Bleachershane.

In the song, the character starts to feel that he is rooted to the ground, but there is a force pulling him up to the sky. A voice calls out, "Come up and be a kite", and he is drawn up to the sky and takes the form and texture of a kite. Suddenly he's flying "like a feather on the wind", and for a while he enjoys it; but the longing for home and the security of the ground overtake these feelings. (Music Talk, 1978)

I look at eye level, it isn't good enough
And then I find it out when I take a good look up
There's a hole in the sky with a big eyeball
Calling me:

I feel a rush along my body, like a bullet
I'm 2-D after a push-and-pull feeling
And I want to get back to safe home:
I love the homeland dome

I got no limbs, I'm like a feather on the wind
Well, I'm not sure if I want to be up here, at all
And I'd like to be back on the ground,
But I don't know how to get down--down--down!