King Of The Mountain 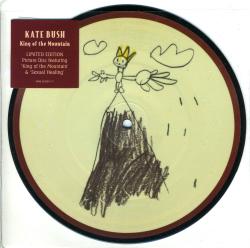 'King Of The Mountain' 7" picture disc 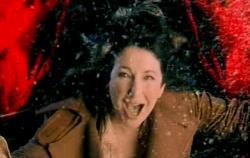 Still from the music video for 'King Of The Mountain'

Song written by Kate Bush. Originally released on 24 October 2005 as the first and only single from her eighth studio album Aerial. The song was first played on 21 September 2005 on BBC Radio 2. The song was written ten years prior to most songs on the album.

'King Of The Mountain' was released as a CD-single, a picture disc 7" single and digital download. All formats came with an extra track: Sexual Healing.

There is only one official version of 'King Of The Mountain': the album version, which was also released as a single. However, there are a few unofficial remixes of the track, all issued in 2005 on bootleg 12" singles.
A live version appears on the album Before The Dawn.

The music video was first aired on UK's Channel 4 on 15 October 2005. It was directed by Jimmy Murakami, produced by Michael Algar, edited at The Farm (Dublin) by Hugh Chaloner with flame and 3D effects by Niall O hOisin, Arron Inglis, Brian O'Durnin and Mark from Australia

'King Of The Mountain' was covered by Frozen Inertia and Gizelle Smith.

Elvis are you out there somewhere
Looking like a happy man?
In the snow with Rosebud
And king of the mountain

Another Hollywood waitress
Is telling us she's having your baby
And there's a rumour that you?re on ice
And you will rise again someday
And that there's a photograph
Where you're dancing on your grave

Elvis are you out there somewhere
Looking like a happy man?
In the snow with Rosebud
And king of the mountain