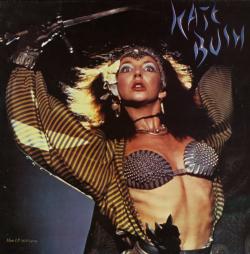 On 15 June 1983, a compilation album entitled 'Kate Bush' was released in the USA and Canada. EMI Records released this mini-LP because they wanted to promote Kate Bush, who was relatively unknown in the USA at the time. In Canada, she was more famous, and so the Canadian version ended up with one extra track. The cover shows Kate in the warrior costume she was wearing in the music video for one of the tracks included in the album, 'Babooshka'.

The album was reviewed a few times in the American press. "An excellent, if somewhat schizophrenic, introduction to British singer Bush" wrote Alex Cain in Pulse!, August 1983. J.D. Considine wrote in Musician, September 1983: "An easy introduction, at the same time it introduces (...) a number of Kate Bush's failings."

Quite honestly, I don't think I would have chosen those five. It has very much to do with the record company and what they see a market for. I did want Sat In Your Lap to be on there. It's also quite nice to get the French song on there 'cause I quite like that. (...) I think there's so much aimed at the Canadian market where there's a French population and the song was especially done for the French people, so it made sense to put in on the Canadian version. (Brian Berry, 'Kate Bush'. Wireless, September 1983)