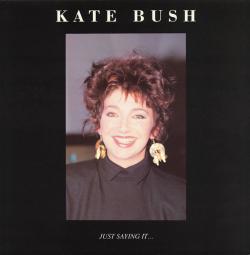 Unofficial album, featuring an interview with Kate Bush, during the promotion of her album Hounds Of Love. It was released in 1986 by Discussion Records.

'Just Saying It...' was released on LP only. There are three different versions: a picture disc version, a version on shimmering gold vinyl and a version on purple vinyl.