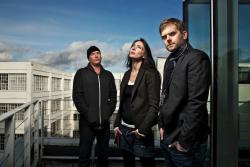 Hybrid are a British electronic music group previously based in Swansea, Wales, now based in Worcestershire, comprising Mike Truman and Charlotte James. Beginning in 1995, Mike Truman and previous band member Chris Healings were primarily known as a breakbeat collective, although they overlapped considerably with progressive house and trance. However, the band are now taking a more structured approach to song writing, with the addition of Charlotte James contributing to the writing and vocal process and developing their work in film scores and film music production. Hybrid are considered pioneers of the electronic genre, and have produced four studio albums, all garnering critical acclaim.

They are known for their cinematic approach to their production, specifically with the use of orchestral sounds, which is particularly notable on their debut album Wide Angle when they collaborated with the Russian Federal Orchestra. Also over their career, they have produced over 100 remixes for over 40 artists including U2, Moby, Rob Dougan, R.E.M., The Future Sound of London.

Their version of Kate Bush's Experiment IV was released in the 4 CD box set edition of their compilation album 'Classics' in 2012. The vocals were performed by Sally Larkin.