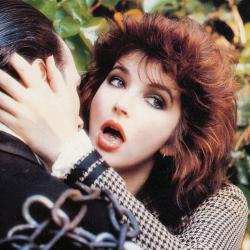 Song written by Kate Bush. Originally released on her fourth album, The Dreaming. The song was inspired by Harry Houdini, the escape artist who became known as the "Handcuff King" at the beginning of the 20th century. In the song, the keys to his chains were passed on to him by his wife during a kiss. This scene is depicted on the sleeve of the album. Following his death in 1926, his wife Bess tried to contact him during spiritual seances. Since Houdini was a spirited debunker of spiritualist frauds during his lifetime, he had devised a code - 'Rosabel, believe' - to ensure she knew that it really was him. In January 1929, it was reported in the Detroit News that Bess had actually succeeded in contacting him. She later came to believe that the code had been betrayed and she had been tricked. The story fascinated Kate so much that she decided to write a song about it.

'Houdini' appeared as the B-side of the single Night Of The Swallow, released in Ireland only.

The side most people know of Houdini is that of the escapologist, but he spent many years of his life exposing mediums and seances as frauds. His mother had died, and in trying to make contact through such spiritual people, he realized how much pain was being inflicted on people already in sorrow, people who would part with money just for the chance of a few words from a past loved one. I feel he must have believed in the possibility of contact after death, and perhaps in his own way, by weeding out the frauds, he hoped to find just one that could not be proven to be a fake. He and his wife made a decision that if one of them should die and try to make contact, the other would know it was truly them through a code that only the two of them knew.
His wife would often help him with his escapes. Before he was bound up and sealed away inside a tank or some dark box, she would give him a parting kiss, and as their lips met, she would pass him the key which he would later use to unlock the padlocks that chained him. After he died, Mrs. Houdini did visit many mediums, and tried to make contact for years, with no luck - until one day a medium called Mr. Ford informed her that Houdini had come through. She visited him and he told her that he had a message for her from Houdini, and he spoke the only words that meant for her the proof of her husband's presence. She was so convinced that she released an official statement to the fact that he had made contact with her through the medium, Ford.
It is such a beautiful and strange story that I thought I had very little to do, other than tell it like it was. But in fact it proved to be the most difficult lyric of all the songs and the most emotionally demanding. I was so aware of trying to do justice to the beauty of the subject, and trying to understand what it must have been like to have been in love with such an extraordinary man, and to have been loved by him. I worked for two or three nights just to find one line that was right. There were so many alternatives, but only a few were right for the song. Gradually it grew and began to piece together, and I found myself wrapped up in the feelings of the song - almost pining for Houdini. Singing the lead vocal was a matter of conjuring up that feeling again and as the clock whirrs and the song flashes back in time to when she watched him through the glass, he's on the other side under water, and she hangs on to his every breath. We both wait. (Kate Bush Club newsletter, October 1982)

During his incredible lifetime Houdini took it upon himself to expose the whole spiritualist thing - you know, seances and mediums. And he found a lot them to be phoney, but before he died Houdini and his wife worked out a code, so that if he came back after his death his wife would know it was him by the code. So after his death his wife made several attempts to contact her dead husband, and on one occasion he did come through to her. I thought that was so beautiful - the idea that this man who had spent his life escaping from chains and ropes had actually managed to contact his wife. The image was so beautiful that I just had to write a song about it. ('The Dreaming'. Poppix (UK), Summer 1982)

Well the idea is that it's as she's watching him go off into his tank of water for the last time, and it's the idea that she is this sort of possessed demon that's terrified of him going. And I drank about a pint of milk before I did the vocal and ate like two bars of chocolate. And the great thing about those sort of foods is it really creates a lot of mucus and normally that's the last thing you want when you sing, you normally want a very pure voice, but I wanted to get all that sort of spit and gravel in the throat. [Clears throat] So I worked on bringing the gravel out and then we also... as I sung the track we sped the track up a bit so that when it was played back the voice would just be slightly deeper, just have slightly more weight in it. (Dreaming debut, Radio 2 (UK), September 13, 1982)

I wait at the table,
And hold hands with weeping strangers,
Wait for you
To join the group.

The tambourine jingle-jangles.
The medium roams and rambles.
Not taken in,
I break the circle.

I want this man
To go away now.

With a kiss
I'd pass the key
And feel your tongue
Teasing and receiving.
With your spit
Still on my lip,
You hit the water.

Him and I in the room
To prove you are with us too.

He's using code that only you and I know.
This is no trick of his.
This is your magic.

I'd catch the cues,
Watching you,
Hoping you'd do something wrong.

Everybody thinks you'll never make it,
But every time,
You escape:

'Rosabel believe,
Not even eternity
Can hold Houdini!'

Through the glass
I'd watch you breathe.
("Not even eternity--")
Bound and drowned,
And paler than you've ever been.
("--will hold Houdini!")
With your life
The only thing in my mind--
We pull you from the water!