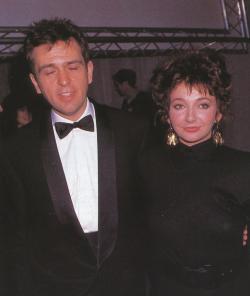 Peter Gabriel and Kate Bush at the BPI Awards

In 1967, he founded Genesis with fellow Charterhouse School pupils Tony Banks, Anthony Phillips, Mike Rutherford, and drummer Chris Stewart. Genesis drew some attention in Britain and eventually also in European countries thanks to Gabriel's flamboyant stage presence, which involved numerous bizarre costume changes and comical, dreamlike stories told as the introduction to each song. Among Gabriel's many famous costumes, which he developed to visualise the musical ideas of the band as well as to gain press coverage, were "Batwings" for the band's usual opening number, "Watcher of the Skies". Other costumes included "The Flower" and "Magog", which were both alternately worn for "Supper's Ready" from the album 'Foxtrot'.

In the end, Gabriel's position as the lead singer of the band and the added attention garnered by his flamboyant stage persona, led to tensions within the band. Genesis had always operated more or less as a collective, and Gabriel's burgeoning public profile led to fears within the group that he was being unfairly singled out as the creative hub. The band also began to feel confined by the reputation (and fans' expectations) attached to the elaborate theatrical performances, believing that the visual element of their performances was receiving more attention than their actual music. The breaking point came with the difficult pregnancy of Gabriel's wife, Jill, and the subsequent birth of their first child, Anna-Marie. When he opted to stay with his sick daughter and wife, rather than record and tour, the resentment from the rest of the band led Gabriel to conclude that he had to leave the group.

After leaving Genesis, Peter Gabriel released four solo albums, all of them nameless, between 1977 and 1982. On his third, nicknamed 'Melt' because of the cover photograph, Kate performed backing vocals on two tracks: Games Without Frontiers and No Self Control - both released as singles. This was released just after the two appeared on television together during the 1979 Christmas special Kate, when they performed Another Day together.

Gabriel toured extensively for each of his albums. Initially, he shied away from the theatrics that had defined his performances with Genesis. For his second solo tour, his entire band shaved their heads. By the time of the fourth album he began involving elaborate stage props and acrobatics which had him suspended from gantries, distorting his face with Fresnel lenses and mirrors, and wearing unusual make-up.

In 1986, Peter Gabriel released his fifth solo album, 'So', which gave him a worldwide popularity. The album spawned several big hits, most notably 'Sledgehammer' (with an elaborate animated music video partly produced by Aardman Animations) and Don't Give Up - a duet with Kate Bush. Gabriel earned two BPI Awards in 1987: one for Best British Male Solo Artist and one for Best British Video ('Sledgehammer').

Following this, Gabriel released 'Us' in 1992, an album in which he explored the pain of recent personal problems; his failed first marriage, and the growing distance between him and his first daughter. This was followed by another world tour and some live releases on CD and DVD. Gabriel fell silent for a couple of years but released the album OVO in 2000, a soundtrack for the Millennium Dome in London. Two years later, he released 'Up', his first full length studio album in a decade.

Since 2010, Gabriel has been involved in music projects that seem to rehash old music. On 'Scratch my back' (2010) he recorded cover versions of songs by a.o. David Bowie, Lou Reed and Radiohead. The album 'And I'll Scratch Yours' was to feature those artists covering Peter Gabriel songs. When several of them declined, replacements were found and the album was released after some delay in 2013. Meanwhile, in 2011, Gabriel released 'New Blood', a collection of his earlier songs recorded with an orchestra. A special edition of the album features solely instrumental versions of some of the songs.