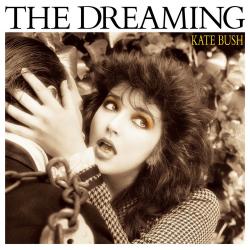 Fourth album by Kate Bush, released by EMI Records on 13 September 1982. Almost two years in the making, it was the first album Bush produced entirely by herself. All songs were written and composed by Kate.

The album was originally released on LP and tape. Unlike its predecessor Never For Ever, the LP was packaged in a regular sleeve, featuring the lyrics on the inner sleeve.
In the second half of the Eighties, 'The Dreaming' was released on CD. The album was also included in the This Woman's Work box set, and in 2005, a so-called 'mini LP replica' version was released on CD in Japan.

Upon its release, 'The Dreaming' met with a mixed critical reception. Many were baffled by the dense soundscapes Bush had created. Record Mirror wrote: "Quaint, admirable, unclassified, Kate Bush goes her own sweet way... production hard to fault... ranges from the ethereal to the frankly unlistenable." Sounds added: "I'm drowning in a sea of vocal overdubs". Melody Maker said in a favourable review that the album was indeed baffling but also interesting, labelling 'Suspended in Gaffa' the only "vaguely conventional track", adding: "It's the sort of album that makes me want to kidnap the artist and demand the explanation behind each track".

Kate about 'The Dreaming'

After the last album, 'Never For Ever', I started writing some new songs. They were very different from anything I'd ever written before - they were much more rhythmic, and in a way, a completely new side to my music. I was using different instruments, and everything was changing; and I felt that really the best thing to do would be to make this album a real departure - make it completely different. And the only way to achieve this was to sever all the links I had had with the older stuff. The main link was engineer Jon Kelly. Everytime I was in the studio Jon was there helping me, so I felt that in order to make the stuff different enough I would have to stop working with Jon. He really wanted to keep working with me, but we discussed it and realised that it was for the best. ('The Dreaming'. Poppix (UK), Summer 1982)

Yes, it's very important for me to change. In fact, as soon as the songs began to be written, I knew that the album was going to be quite different. I'd hate it, especially now, if my albums became similar, because so much happens to me between each album - my views change quite drastically. What's nice about this album is that it's what I've always wanted to do. For instance, the Australian thing: well, I wanted to do that on the last album, but there was no time. There are quite a few ideas and things that I've had whizzing around in my head that just haven't been put down. I've always wanted to use more traditional influences and instruments, especially the Irish ones. I suppose subconsciously I've wanted to do all this for quite some time, but I've never really had the time until now. ('The Dreaming'. Poppix (UK), Summer 1982)

The thing about all my album titles is that they're usually one of the last things to be thought of because it's so difficult just to find a few words to sum the whole thing up. I've got this book which is all about Aborigines and Australian art and it's called The Dreaming. The song was originally called "Dreamtime", but when we found out that the other word for it was "The Dreaming" it was so beautiful - just by putting "the" in front of "dreaming" made something very different - and so I used that. It also seems to sum up a lot of the songs because one of the main points about that time for the Aborigines was that it was very religious and humans and animals were very closely connected. Humans were actually living in animal's bodies and that's an idea which I particularly like playing with. (Paul Simper, 'Dreamtime Is Over'. Melody Maker (UK), 16 October 1982)

I think [The Dreaming] is about trying to cope...to get through all the shit. I think it was positive: showing how certain people approach all these negative things - war, crime, etc. I don't think I'm actually an aggressive person, but I can be. But I release that energy in work. I think it's wrong to get angry. If people get angry, it kind of freaks everybody out and they can't concentrate on what they're doing. (Jane Solanas, 'The Barmy Dreamer'. NME (UK), 1983)

I have no doubt that those who buy singles because they like my hits, are completely mystified upon hearing the albums. But if it comes to that, they should listen to it loudly! If a single theme linked The Dreaming, which is quite varied, it would be human relationships and emotional problems. Every being responds principally to emotions. Some people are very cool, but they are silenced by their emotions, whatever they might be. To write a song, it's necessary that I be completely steeped in my environment, in my subject. Sometimes the original idea is maintained, but as it takes form, it possesses me. One of the best examples would be this song that I wrote on 'Houdini': I knew every one of the things that I wanted to say, and it was necessary that I find new ways that would allow me to say them; the hardest thing, is when you have so many things to fit into so short a space of time. You have to be concise and at the same time not remain vague, or obscure. The Dreaming was a decisive album for me. I hadn't recorded in a very long time until I undertook it, and that was the first time that I'd had such liberty. It was intoxicating and frightening at the same time. I could fail at everything and ruin my career at one fell swoop. All this energy, my frustrations, my fears, my wish to succeed, all that went into the record. That's the principle of music: to liberate all the tensions that exist inside you. I tried to give free rein to all my fantasies. Although all of the songs do not talk about me, they represent all the facets of my personality, all my different attitudes in relation to the world. In growing older, I see more and more clearly that I am crippled in facing the things that really count, and that I can do nothing about it, just as most people can do nothing. Making an album is insignificant in comparison with that, but it's my only defense. (Yves Bigot, 'Englishwoman is crossing the continents'. Guitares et Claviers (France), February 1986)

My first production. A really difficult album to make. People thought I'd gone mad, the album wasn't warmly received by critics. People told me it was a commercial disaster but it reached number three so that's their problem. ('Love, Trust and Hitler'. Tracks (UK), November 1989)