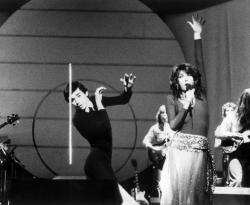 Simon Drake was born as Simon Alexander in Surrey on 1 March 1957. Both sides of his family were connected to the medical profession for some generations. At the age of twelve, he bought Arthur Brown's single 'Fire'. Some years later he saw Arthur at the Rainbow with Kingdom Come. As a huge fan, he was promoted to plugger. He took Arthur round for interviews with the radio. According to Drake: "I got to know him as a person and he mentored my crossover between the security of a day job and the craft of magic."

Drake first came to wider attention in Kate Bush's Tour Of Life in 1979 for which he co-devised visuals and played seven characters. After this, he had a wide and diverse performing history, from Terayama's Tenjo Sajiki theatre in Japan to the Royal Variety Show at the London Palladium before Queen Elizabeth II. He advised Nicolas Roeg for the film Castaway, with the tricky task of coaching Oliver Reed in sleight of hand, and was magic advisor to Harvey Keitel on Fairy Tale, A True Story. In two series of the award-nominated The Secret Cabaret for Channel Four, he won an international cult following for his original and shocking presentation of illusions and manipulation routines. He worked alongside magician Pat Page.

In August 1993 he was seen on American TV in the special Raising Hell, in which he co-starred with Iron Maiden in their final show with Bruce Dickinson on vocals in those years (the singer rejoined the band some years later). The same month Drake performed with Carl Davis and the Bournemouth Symphony Orchestra. Drake has performed twice as a guest with The Royal Ballet at The Royal Opera House, Covent Garden and the London Coliseum. He has appeared at festivals and tours in Canada, New Zealand, Europe and in the UK and has had residencies at many London nightclubs as well as a month in cabaret at The Casino in Monte Carlo, Paris and Dubai. He was the magic and effects supervisor to Cameron Mackintosh for the West End production of The Witches of Eastwick and Ducktastic, directed by Kenneth Branagh.

In 1996 he opened his own 5,000-square-foot (460 m2) venue, Simon Drake's House of Magic, in a converted Victorian building at an unpublicised location in London. Described by the Northern Echo newspaper (19 Aug 1999) as a "grey, anonymous-looking building" This performing space specialises in corporate entertainment functions with twice monthly public performance nights. Shows feature Drake's trademark effects as well as light-hearted amputations and decapitations of senior executives and celebrity guests. His regular warm-up act is piano-based comedian Adam Kay, aka Amateur Transplants.