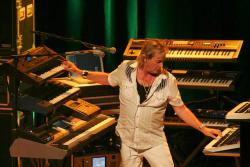 Geoffrey "Geoff" Downes was born in Stockport on 25 August 1952. He moved to London to pursue a music career. In 1977, he formed the Buggles with Trevor Horn. They enjoyed success with their debut album 'The Age Of Plastic' (1980). In May 1980, Downes joined Yes together with Horn and recorded 'Drama' (1980). After Yes disbanded in 1981, Downes helped Trevor Horn to produce a second Buggles album, 'Adventures in Modern Recording' (1981) although he only was involved primarily in sound effects on a few tracks. He then co-founded Asia with ex-Yes fellow musician Steve Howe. He left Asia in 1986, rejoined in 1990, and has been a part of the line-up since then; he released several solo albums and produced for several artists, including Mike Oldfield and the Thompson Twins.

In 1981, Downes played the Fairlight CMI on Kate's song Sat In Your Lap.

In 2006, Downes reunited the original Asia line-up and rejoined Yes in 2011; he is currently a member of both groups. Since 1998, he has reunited with Horn on special occasions to perform songs from The Buggles.