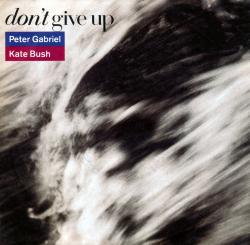 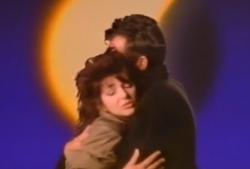 Still from the music video of 'Don't Give Up'

Song written by Peter Gabriel. Originally released on his fifth studio album 'So' in 1986. Also released as a single from the album in October 1986. Gabriel originally wrote the song from a reference point of American roots music and he approached entertainer Dolly Parton to sing the song with him. However, Parton turned him down, so his friend Kate Bush took her place. She recorded her vocals in February 1986 at Peter Gabriel's home studio in Ashcombe House. Peter had already recorded his vocals, so she followed his lead. After this recording, she felt she had "messed it up" and so she returned later to sing it again.

There are two versions of the Peter Gabriel and Kate Bush duet 'Don't Give Up': an edit for the single and the full length album version. However, Peter Gabriel released a live version of the track, sung with Paula Cole in 1993, then an all-orchestral version with Ane Brun on his 2011 album 'New Blood'.

Two videos were created for the song. The first, directed by Godley & Creme, consisted of a single take of the singers in an embrace, as the sun enters total eclipse and re-emerges; the second, by Jim Blashfield, featured Gabriel and Bush's faces superimposed over film of a town and its people in disrepair.

Peter Gabriel has performed 'Don't Give Up' live various times, amongst others during his Secret World live tour in 1993. Kate Bush performed the song with him just once, when she was a surprise guest on Peter Gabriel's concert on 28 June 1987 at Earl's Court, London.

Peter:
In this proud land we grew up strong
We were wanted all along
I was taught to fight, taught to win
I never thought I could fail

Peter:
Though I saw it all around
Never thought I could be affected
Thought that we'd be the last to go
It is so strange the way things turn

Drove the night toward my home
The place that I was born, on the lakeside
As daylight broke, I saw the earth
The trees had burned down to the ground

Peter:
Got to walk out of here
I can't take anymore
Going to stand on that bridge
Keep my eyes down below

Moved on to another town
Tried hard to settle down
For every job, so many men
So many men no-one needs