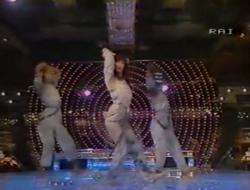 Discoring was an Italian music show broadcast by RAI 1 from 1977 to 1989, created by Gianni Boncompagni, aired mainly on Sunday. The program could be considered analogous to the English show Top of the Pops.

The first episode was broadcast February 20, 1977. The formula provided for the exhibition of Italian and international singers and groups (almost always in playback) and a rundown of the list of best selling albums and singles. The show was presented, among others, by Gianni Boncompagni (assisted by Antonella Giampaoli and then by Roberta Manfredi), Awana Gana, Claudio Cecchetto, the trio Anna Pettinelli - Isabel Russinova - Emanuela Falcetti, Jocelyn, Kay Rush, Sergio Mancinelli and Carlo Conti.

The program was one of the last in RAI TV to switch from black and white to color: the first two seasons aired in black and white, then from the third season the show began to be broadcast in color (a year and a half after the start of color broadcasting of RAI).

Kate Bush appeared on Discoring on 19 October 1982 for a lipsynched performance of The Dreaming.