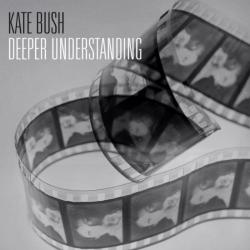 Still from the music video for 'Deeper Understanding'

Song written by Kate Bush. Originally released on her sixth studio album The Sensual World, it was re-recorded for her 2011 album Director's Cut. This version was released as a single on 5 April 2011. Kate Bush explained that the song is about how people are replacing human relationships with technology.

Three different versions of 'Deeper Understanding' exist: the original 1989 album version, the 2011 album version from 'Director's Cut', and a radio edit of that version.

A short film to accompany the track premiered on Kate Bush's official YouTube channel on Monday, 25 April 2011. It is directed by Bush herself and stars Robbie Coltrane, Frances Barber, Noel Fielding, and the voice of her son Albert, who plays the role of the computer program.

Michael Cragg wrote in the Guardian (UK) in 2011: "The 2011 retwizzle is two minutes longer, seems to have a new vocal and, naturally for the music climate of today, a lot of vocal processing and vocoder. The chorus is much more explicitly meant to be a conversation between human and computer: "I bring you love and deeper understanding" croons the machine like a malfunctioning ZX Spectrum. It's not a disaster, in fact once you get used to the vocals it's still a great Kate Bush track, but if revisiting songs is going to mean adding an extra minute and a half of harmonica solos to each one then we may have problems." The New Yorker added: "Where the original chattered and cracked, this version susurrates and warps, a bit more like life online."

This is about people... well, about the modern situation, where more and more people are having less contact with human beings. We spend all day with machines; all night with machines. You know, all day, you're on the phone, all night you're watching telly. Press a button, this happens. You can get your shopping from the Ceefax! It's like this long chain of machines that actually stop you going out into the world. It's like more and more humans are becoming isolated and contained in their homes. And this is the idea of someone who spends all their time with their computer and, like a lot of people, they spend an obsessive amount of time with their computer. People really build up heavy relationships with their computers! And this person sees an ad in a magazine for a new program: a special program that's for lonely people, lost people. So this buff sends off for it, gets it, puts it in their computer and then like , it turns into this big voice that's saying to them, "Look, I know that you're not very happy, and I can offer you love: I'm her to love you. I love you!" And it's the idea of a divine energy coming through the least expected thing. For me, when I think of computers, it's such a cold contact and yet, at the same time, I really believe that computers could be a tremendous way for us to look at ourselves in a very spiritual way because I think computers could teach us more about ourselves than we've been able to look at, so far. I think there's a large part of us that is like a computer. I think in some ways, there's a lot of natural processes that are like programs... do you know what I mean? And I think that, more and more, the more we get into computers and science like that, the more we're going to open up our spirituality. And it was the idea of this that this... the last place you would expect to find love, you know, real love, is from a computer and, you know, this is almost like the voice of angels speaking to this person, saying they've come to save them: "Look, we're here, we love you, we're here to love you!" And it's just too much, really, because this is just a mere human being and they're being sucked into the machine and they have to be rescued from it. And all they want is that, because this is "real" contact. (Roger Scott, BBC Radio 1 interview, 14 October 1989)

Yes, it is emotional disconnection, but then it's very much connection, but in a way that you would never expect. And that kind of emotion should really come from the human instinctive force, and in this particular case it's coming from a computer. I really liked the idea of playing with the whole imagery of computers being so cold, so unfeeling. Actually what is happening in the song is that this person conjures up this program that is almost like a visitation of angels. They are suddenly given so much love by this computer - it's like, you know, just love. There was no other choice. Who else could embody the visitation of angels but the Trio Bulgarka? [laughs] (John Diliberto, 'Kate Bush's Theater Of The Senses'. Musician, February 1990)

I suppose it's looking at society where more and more people are being shut away in their homes with televisions and computers, and in a way being encouraged not to come out. You know, there's so many people who live in London in high-rise flats - they don't know their neighbors, they don't know anyone else in the building. People are getting very isolated. It was the idea of this person who had less and less human contact, and more and more contact with their computer, where they were working on it all day and all night. They see an advert in a magazine for a program for people who are lonely and lost, so they write off for it. When they get it back in the mail and put it into the computer, it's the idea - a bit like an old sci-fi film, really - where it would just come to life and suddenly there's this kind of incredible being there, like a great spiritual visitation. This computer is offering this person love, and the idea that they've had such little human warmth, they're getting this tremendous affection and deep love from their computer. But it's so intense it's too much for them to take, and they actually have to be rescued from just being killed with love, I suppose. (WFNX Boston radio, Fall 1989)

It's like today, a lot of people relate to machines, not to human beings, like they hear telephone [Makes ringing noise] and think "Is that for me?" I guess it playing with the idea of how people get more and more isolated from humans and spend a lot more time with machines. I suppose America's a really good example where there are some people who never go out, they watch television all day, they're surrounded by machines, they shop through television, they speak to people on the phone; it's just distant contact. The idea of the computer buffs who end up going through divorce cases because their wives can't cope with the attention the computer gets. They have an obsessive effect on people, and this track's about one of those types.
I was playing with the juxtaposition of high tech and spirituality. I suppose one inspiration was a program I saw last year about a scientist called Stephen Hawking who for years had been studying the universe, and his concepts are like the closest we've ever come to understanding the answer. But unfortunately he has a wasting-away disease, and the only way he can talk is through voice process. It was one of the most moving things I've ever heard. He was so close to the answers to everything, and yet his body was going on him - in some ways it was the closest I'd ever come to hearing God speak! The things he was saying were so spiritual, it was like he'd gone straight through science and come out the other end. It was like he'd gone beyond words, and I do think that there is this possibility with computers that we really could learn about ourselves on levels that could take us into much deeper areas. With my music, I like to combine both the old and the new, the high tech and the compassion from the human element, the combination of synths and acoustic instruments.(Will Johnson, 'A Slowly Blooming English Rose'. Pulse, December 1989)

I was loading a new programme
I had ordered from a magazine:

"Are you lonely, are you lost?
This voice console is a must"
I press Execute

I did not eat, I did not sleep
The intensity increasing
'Til my family found me and intervened

But I was lonely, I was lost
Without my little black box
I pick up the phone and go, Execute