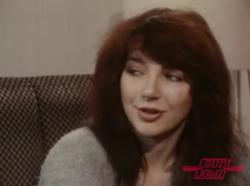 Kate Bush on Countdown in 1979

The Dutch music show Countdown was a popular music show broadcast by Veronica between 1978 and 1993. Initially the show broadcast live concerts by pop and rock stars, but in the early 1980's it was reformatted to a weekly chart show, directly competing with Toppop. It soon ranked as the top music show in the whole of Europe. Due to the popularity this show, the career of one of its hosts throughout the entire period, Adam Curry, rose like a star. Other hosts included Simone Walraven, Jasper Faber, Erik de Zwart, Simone Angel and Wessel van Diepen. A special English-language edition of Countdown was produced for pan-European music channel Music Box in 1987, with presenters Adam Curry and Erik de Zwart.

Kate Bush was interviewed for Countdown in 1979. It was the only time - aside from various music videos - that she appeared in the programme.