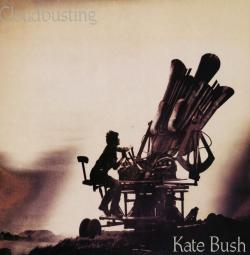 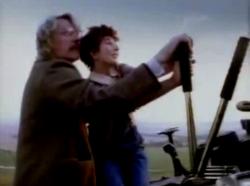 Still from the music video of 'Cloudbusting'

Song written by Kate Bush. Originally released on her fifth studio album Hounds Of Love. Released as the second single from the album on 14 October 1985.

The song is about the very close relationship between psychologist and philosopher Wilhelm Reich and his young son, Peter, told from the point of view of the son. It describes the boy's memories of his life with Reich on their family farm, called Orgonon where the two spent time "cloudbusting", a rain-making process which involved pointing at the sky a machine designed and built by Reich, called a cloudbuster. The lyric further describes Wilhelm Reich's abrupt arrest and imprisonment, the pain of loss the young Peter felt, and his helplessness at being unable to protect his father. The song was inspired by Peter Reich's 1973 memoir, A Book of Dreams, which Bush read and found deeply moving.

Kate actually contacted Peter Reich to explain her motives in writing 'Cloudbusting' and to express the wish that she hoped he would approve of the song. She received his reply a while later, saying that he loved what she was doing.

The song was used in the eleventh episode of the third series of The Handmaid's Tale.

There are three different versions of 'Cloudbusting': the album version (which was identical to the single version), the video version (released on CD in 1994) and the 12" remix entitled 'The Organon Re-Mix', released as a 12" single in 1985 and later on CD.
A live version appears on the album Before The Dawn.

The music video was directed by Julian Doyle and was conceived by Terry Gilliam and Kate as a short film. In it, Canadian actor Donald Sutherland, portrays Wilhelm Reich, and Kate Bush, portraying his son Peter. Filming took place at The Vale of White Horse in Oxfordshire, England. Bush found out in which hotel Sutherland was staying from actress Julie Christie's hairdresser and went to his room to personally ask him to participate in the project.

The video shows the two on the top of a hill trying to make the cloudbuster work. Reich leaves Peter on the machine and returns to his lab. In flashback, he remembers several times he and Peter enjoyed together as Reich worked on various scientific projects, until he is interrupted by government officials who arrest him and ransack the lab. Peter senses his father's danger and tries to reach him, but is forced to watch helplessly as his father is driven away. Peter finally runs back to the cloudbuster and activates it successfully, to the delight of his father who sees it starting to rain.

In the UK, the music video was shown at some cinemas as an accompaniment to the main feature. Due to difficulties on obtaining a work visa for Sutherland at short notice, the actor offered to work on the video for free. Although the events depicted in the story took place in Maine, the newspaper clipping in the music video reads "The Oregon Times," likely a reference to Reich's home and laboratory Orgonon. The Cloudbusting machine in the video was designed and constructed by people who worked on the Alien creature and bears only a superficial resemblance to the real cloudbusters, which were smaller and with multiple narrow, straight tubes and pipes, and were operated while standing on the ground. In a reference to the source material of the song, Bush pulls a copy of Peter Reich's "A Book of Dreams" out of Sutherland's coat.

Kate performed 'Cloudbusting' in the German show Show Vor Acht in September 1985. This was a lipsynch performance. Another lipsynch performance happened on RAI television in Italy (date of broadcast unknown).
The song was also performed as the last encore during Kate's Before The Dawn shows in London, 2014.

The reviews for the song, when it was released as a single, were a mixture of acclaim, bewilder and incomprehension. Jane Simon in Sounds wrote: "Makes me shiver. (...) The string sextet will wrap themselves around your nervous system... I really think she does this sort of thing deliberately." Record Mirror's Andy Strickland: "Infuriatingly catchy bit of stringy nonsense." NME's David Quantick: "A fine vocal... married to a rotten boring tune and some orchestral wittering." Caroline Sullivan in Melody Maker: "A dreamy gentle intense Sousaesque marching tune chockablock with the unsual whimsey."

This was inspired by a book that I first found on a shelf nearly nine years ago. It was just calling me from the shelf, and when I read it I was very moved by the magic of it. It's about a special relationship between a young son and his father. The book was written from a child's point of view. His father is everything to him; he is the magic in his life, and he teaches him everything, teaching him to be open-minded and not to build up barriers. His father has built a machine that can make it rain, a 'cloudbuster'; and the son and his father go out together cloudbusting. They point big pipes up into the sky, and they make it rain. The song is very much taking a comparison with a yo-yo that glowed in the dark and which was given to the boy by a best friend. It was really special to him; he loved it. But his father believed in things having positive and negative energy, and that fluorescent light was a very negative energy - as was the material they used to make glow-in-the-dark toys then - and his father told him he had to get rid of it, he wasn't allowed to keep it. But the boy, rather than throwing it away, buried it in the garden, so that he would placate his father but could also go and dig it up occasionally and play with it. It's a parallel in some ways between how much he loved the yo-yo - how special it was - and yet how dangerous it was considered to be. He loved his father (who was perhaps considered dangerous by some people); and he loved how he could bury his yo-yo and retrieve it whenever he wanted to play with it. But there's nothing he can do about his father being taken away, he is completely helpless. But it's very much more to do with how the son does begin to cope with the whole loneliness and pain of being without his father. It is the magic moments of a relationship through a child's eyes, but told by a sad adult. (Kate Bush Club newsletter, 1985)

'Cloudbusting' is a track that was very much inspired by a book called A Book Of Dreams. This book is written through a child's eyes, looking at his father and how much his father means to him in his world - he's everything. his father has a machine that can make it rain, amongst many other things, and there's a wonderful sense of magic as he and his father make it rain together on this machine. The book is full of imagery of an innocent child and yet it's being written by a sad adult, which gives it a strange kind of personal intimacy and magic that is quite extraordinary. The song is really about how much that father meant to the son and how much he misses him now he's gone. (Conversation Disc Series, ABCD 012, 1985)

It's a song with a very American inspiration, which draws its subject from 'A Book Of Dreams' by Peter Reich. The book was written as if by a child who was telling of his strange and unique relationship with his father. They lived in a place called Organon, where the father, a respected psycho-analyst, had some very advanced theories on Vital Energy; furthermore, he owned a rain-making machine, the Cloudbuster. His son and he loved to use it to make it rain. Unfortunately, the father was imprisoned because of his ideas. In fact, in America, in that period, it was safer not to stick out. Sadly, the father dies in prison. From that point on, his son becomes unable to put up with an orthodox lifestyle, to adapt himself. The song evokes the days of happiness when the little boy was making it rain with his father. (Yves Bigot, 'Englishwoman Is Crossing The Continents'. Guitares et Claviers (France), February 1986)

If I've got this right,he believed that sexual energy was positive, usable energy that he tied in with his concept of orgone energy. He upset a lot of people selling orgone boxes, saying they could cure cancer and stuff. He ended up being arrested and put in prison. I knew nothing about Wilhelm when I read the book,which was his son's experience of all this, written from a child's point of view with a tremendous innocence and sadness. Years ago, I just went into a shop and picked it off the shelf, and really liked the title and the picture on the front. I'd never bought a book before which I hadn't known anything about;I just felt I'd found something really special. And nine, 10 years later, I re-read it and it turned into a song. When it was finished, I wrote a letter to Peter Reich saying what I'd done. It was important to me in some way to have a sense of his blessing because his book really moved me. He sent me back such a lovely letter. It was an incredible feeling of returning something he'd given to me. (Mat Snow, 'Follow That!'. Q/HMV special magazine, 1990)

That did all fall apart over a period of about ten bars. And everything just started falling apart, 'cause it didn't end properly, and, you know, the drummer would stop and then the strings would just sorta start wiggling around and talking. And I felt it needed an ending, and I didn't really know what to do. And then I thought maybe decoy tactics were the way, and we covered the whole thing over with the sound of a steam engine slowing down so that you had the sense of the journey coming to an end. And it worked, it covered up all the falling apart and actually made it sound very complete in a way. And we had terrible trouble getting a sound effect of steam train so we actually made up the sound effect out of various sounds, and Del was the steam. (Laughs) And we got a whistle on the Fairlight for the "poo poop". (Richard Skinner, 'Classic Albums interview: Hounds Of Love'. BBC Radio 1, 26 January 1992)

But every time it rains
You're here in my head
Like the sun coming out
Ooh, I just know that something good is going to happen
And I don't know when
But just saying it could even make it happen

On top of the world,
Looking over the edge,
You could see them coming
You looked too small
In their big, black car
To be a threat to the men in power

I hid my yo-yo
In the garden
I can't hide you
From the government
Oh, God, Daddy
I won't forget,

'Cause every time it rains,
You're here in my head,
Like the sun coming out
Ooh, I just know that something good is going to happen
And I don't know when
But just saying it could even make it happen