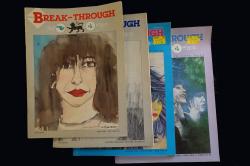 Four issues of the fanzine 'Break-through'

The fanzine was operated by Dale Sommerville, a wheat farmer from Hartney, Manitoba. He married a fellow Kate fan, who moved to the farm to live with him. The marriage and the fanzine finally folded because of Sommerville's religious beliefs. The fanzine was succeeded by 'Still breathing' in 1988.