Book Of Dreams (A) 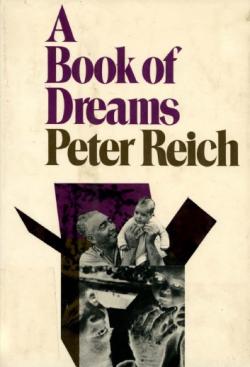 A Book Of Dreams (Original cover) 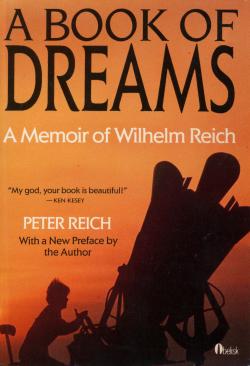 Book written by Peter Reich. According to the writer: "This book wrote itself in the summer of 1970. (...) Most of the childhood passages are virtually as they poured out, first draft. The memories were so keen and vivid that I was not conscious of any effort in writing... simply of moving fingers fast enough over the typewriter keyboard to keep up."

Peter Reich is the son of Wilhelm Reich, one of the most controversial thinkers of the twentieth century. He began as a student of Sigmund Freud, but, whereas Freud believed that sexual repression was necessary to provide the structure and driving force for civilisation, Reich believed that it was at the very heart, not only of many psychological and physical ailments, but that it is part of a destructive tendency in human behaviour which at times expresses itself through the murder of the healthiest individuals - e.g. Jesus and Giordano Bruno - and a willingness to surrender one's freedom to the most neurotic - e.g. Hitler or Stalin. Later, through his study of the storing of repressed emotions in the musculature and the energy flows which occur during orgasm, Reich claimed to have discovered a form of cosmic life energy which he called "orgone". He built boxes which he called "orgone accumulators" which he claimed were helpful in the physical and psychological healing of patients who sat in them. He also built other devices, such as "cloudbusters", which were supposed to direct orgone into clouds and make it rain. Apparently independent research has provided some support for his claims about the accumulators, and there is anecdotal evidence for the efficacy of the cloudbusters, such as Peter Reich's childhood memories recorded in this book. But, not surprisingly, many claimed that Reich had gone insane.
From the late 40s through to the mid-50s Reich was under investigation by the American Food and Drug Administration for providing an unauthorised form of treatment - the accumulators. In 1954 he was ordered to destroy all of the accumulators and to burn all of his books which mentioned them. Unbeknownst to him, some of the accumulators where moved to New York, and, as a result, he was put on trial for contempt of court. He was sentenced to two years in prison. While still in prison, in 1957, he died of a heart attack.

In "A Book of Dreams" Peter Reich tells us what it was like to have a father who stood defiantly against the status quo, who did strange experiments, who shared with him his deepest hopes and fears, and who was taken from him when he was only 12.

Kate Bush discovered this book during one of her visits to Watkins occult bookshop in 1976. In 1985, Kate released a song inspired by this book called Cloudbusting.