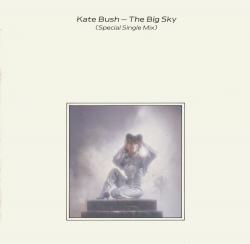 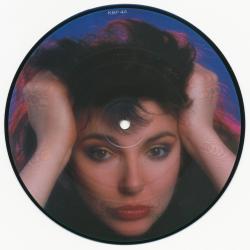 Song written by Kate Bush. Originally released on her fifth album Hounds Of Love in 1985, it was released as the fourth and final single from the album on 28 April 1986. The song is about remembering some of the simple pleasures enjoyed as children that most no longer find the time for, such as spending the afternoon looking at the sky, watching the clouds take on shapes.

There are three versions of The Big Sky: the album version, the special single mix, and the extended remix called The Meteorological Mix.

The music video was directed by Bush herself. It was filmed on 19 March 1986 at Elstree Film Studios in the presence of a studio audience of about hundred fans. The Homeground fanzine was asked to get this audience together, and they did within two weeks. Two coaches took everyone from Manchester Square to Elstree studios early in the morning, after which the Homeground staff, who were cast as some of the aviators, were filmed, and finally the whole audience was admitted for the 'crowd scenes'. The scenes were repeated until Kate had them as she wanted.

'The Big Sky' has been covered by the Affordable Floors and Goodknight Productions, The Hounds Of Love and TM Collective.

Kate about 'The Big Sky'

Someone sitting looking at the sky, watching the clouds change. I used to do this a lot as a child, just watching the clouds go into different shapes. I think we forget these pleasures as adults. We don't get as much time to enjoy those kinds of things, or think about them; we feel silly about what we used to do naturally. The song is also suggesting the coming of the next flood - how perhaps the "fools on the hills" will be the wise ones. (Kate Bush Club newsletter, Issue 18, 1985)

'The Big Sky' was a song that changed a lot between the first version of it on the demo and the end product on the master tapes. As I mentioned in the earlier magazine, the demos are the masters, in that we now work straight in the 24-track studio when I'm writing the songs; but the structure of this song changed quite a lot. I wanted to steam along, and with the help of musicians such as Alan Murphy on guitar and Youth on bass, we accomplished quite a rock-and-roll feel for the track. Although this song did undergo two different drafts and the aforementioned players changed their arrangements dramatically, this is unusual in the case of most of the songs. (Kate Bush Club newsletter, Issue 18, 1985)

'The Big Sky' gave me terrible trouble, really, just as a song. I mean, you definitely do have relationships with some songs, and we had a lot of trouble getting on together and it was just one of those songs that kept changing - at one point every week - and, um...It was just a matter of trying to pin it down. Because it's not often that I've written a song like that: when you come up with something that can literally take you to so many different tangents, so many different forms of the same song, that you just end up not knowing where you are with it. And, um...I just had to pin it down eventually, and that was a very strange beast. (Tony Myatt Interview, November 1985)

That cloud, that cloud
Looks like Ireland
C'mon and blow it a kiss now
But quick,

This cloud, this cloud
Says "Noah,
C'mon and build me an Ark."
And if you're coming, jump,
'Cause

You want my reply?
What was the question?
I was looking at the Big Sky