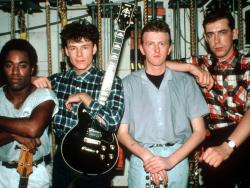 Their first single was 'Harvest Home', recorded and released in 1982. It was a modest success, although it did not reach the official UK Singles Chart. Their next single was 1983's 'Fields Of Fire (400 Miles)', which reached the UK's Top Ten and was rapidly followed by the album 'The Crossing'. The album was a hit in the United States (reaching the Top 20 in the Billboard 200), powered by 'In a Big Country', their only US Top 40 hit single. 'The Crossing' sold over a million copies in the UK and obtained gold record status (sales of over 500,000) in the US. The band also performed on both the Grammy Awards and Saturday Night Live.

While undergoing a lengthy worldwide tour, the band released the single 'Wonderland' in 1984. It reached the top 10 in the UK but flopped in the US, where it stalled on number 86. It was the last single by the band to make a US chart appearance. Their second album 'Steeltown' (1984) was a hit as soon as it was released, entering the UK Albums Chart at No. 1. It featured three UK hit singles. The year ended with the band's participation in the Band Aid charity record 'Do They Know It's Christmas?'. Throughout 1984 and 1985, the band toured the UK, Europe, and, to a lesser extent, the US, both as headliners themselves and in support of such artists as Queen and Roger Daltrey.

1986's The Seer, the band's third album, was another big success in the UK, peaking at Number 2. It produced three further Top 30 singles, including the Irish number one hit 'Look Away', which would also prove to be the band's biggest hit in the UK, peaking at No. 7. Kate Bush provided backing vocals on the album's title track, and the album received good reviews from the music press.

In what some critics felt was an apparent attempt to regain their dwindling US following, Big Country used producer Peter Wolf for their next album, 'Peace in Our Time' (1988), which was recorded in Los Angeles. It reached No. 9 in the UK Albums Chart, but sold poorly in the United States. The next album, 'No Place Like Home' (1991) nearly broke up the band. Drummer Mark Brzezicki returned to the studio as a session drummer after leaving the band. The album found Big Country trying to reinvent themselves and shift away from their 1980s image. It was not a commercial success, and the band were dropped by Phonogram after ten years. Subsequent albums, released by Chrysalis did not receive commercial acclaim.

Of growing concern was the mental and emotional health of lead singer Adamson, who reportedly had struggled with alcoholism for several years. Adamson split with his first wife, who later spoke to Scottish and English tabloid newspapers about his heavy drinking. He moved to Nashville in the mid-1990s where he took up residence and married a hairdresser. While in Nashville he met country music singer/songwriter Marcus Hummon, and together they released an alternative country studio album as The Raphaels in 2001 (four months before Adamson's death).

1999 saw the release of Big Country's eighth and final studio album with Adamson at the helm, 'Driving to Damascus'. Adamson said publicly that he was disappointed that the album did not fare better on the charts, which led to depression. Later that year, he disappeared for a while before resurfacing, stating that he had needed some time off. He returned for the band's 'Final Fling' farewell tour, culminating in a sold-out concert at Glasgow's Barrowland Ballroom on 31 May 2000. They played what turned out to be their last gig in Kuala Lumpur, Malaysia, in October that year. Adamson disappeared again in November 2001. He was found dead in a room at the Best Western Plaza Hotel in Honolulu, Hawaii on 16 December 2001. A memorial to Adamson was held at Dunfermline's Carnegie Hall in January 2002, followed by a tribute concert at Glasgow Barrowlands in May. It brought together the remaining members of both Big Country and Skids; Adamson's teenage children, Callum and Kirsten; as well as Steve Harley, Runrig, Simon Townshend, Midge Ure and Bill Nelson.

Founding members Bruce Watson, Tony Butler and Mark Brzezichi reunited in 2007 to celebrate 25 years of Big Country with dates in Scotland, England and Germany. This resulted in the album 'Twenty Five Live'. The members toured again in December 2010 and January 2011 with Mike Peters of the Alarm and Jamie Watson, Bruce's son, added to the line-up. This line-up began more regular touring as well as writing new material for potential release, in part with the involvement of record producer Steve Lillywhite. The efforts resulted in the creation of Big Country's first single in 11 years, entitled "Another Country".

Further line-up changes happened in 2012, when Butler retired from the group, to be replaced by former Simple Minds bassist Derek Forbes. The group also parted ways with longtime manager Ian Grant at the same time as Butler's departure. The group recorded a new album in the Welsh town of Wrexham. Entitled 'The Journey', the album was released through Cherry Red Records in 2013, becoming the group's first studio record since 1999. Mike Peters left Big Country in November 2013. They were joined a month later by English singer Simon Hough. In July 2015 Derek Forbes was replaced by Scott Whitley. The band still performs live in this line-up.