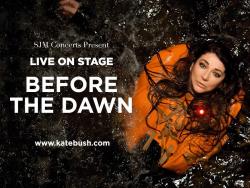 Before The Dawn' Concert poster 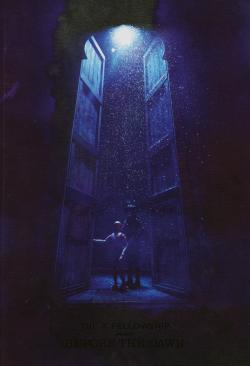 Before The Dawn concert programme 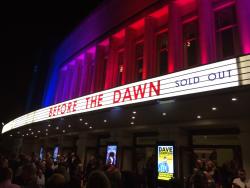 The outside of the Eventim Apollo in London, September 2014 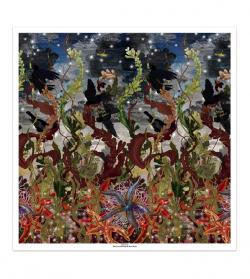 Announced on 21 March 2014, Before The Dawn was the first set of live dates by Kate Bush since the Tour Of Life in 1979. Originally, 15 live dates were announced. A pre-sale ticket allocation took place on 26 March for fans who had signed up to her website in previous months (and years). After this pre-sale, a further seven dates were added due to the high demand. Tickets went on sale to the general public on 28 March and most of them were sold out within 15 minutes. All dates took place at the Eventim Apollo in London (UK). The tour was a critical and commercial success, with all shows sold out.

A hospitality package was available for a longer time, even a few weeks after the tickets went on sale. Priced at £424, the package included a stalls or circle seat, a chilled glass of champagne on arrival, summer picnic hamper of gourmet food, including salmon pâté, spatchcock slow-roasted poussin, prawn salad with pistachio couscous and caramel-dipped berries. Plus a half-bottle of wine.

The show received widespread critical acclaim. The Evening Standard gave the opening show five stars out of five, commenting: "[an] extraordinary mix of magical ideas, stunning visuals, attention to detail and remarkable music.. She was so obviously, so unambiguously brilliant, made last night something to tell the grandchildren about. "Alexis Petridis of 'The Guardian' gave the show five stars out of five, calling the show "another remarkable achievement". Q magazine called it "a night filled with magic and mystery, [...] an undisputed thriumph".

During the run of the show, several celebrities were spotted in the audience, while others took to social media to confirm they saw the show. Some of the names of celebrities that have seen the live show are Lily Allen, Marc Almond, Gemma Arterton, Bjork, Peter Gabriel, Dave Gilmour, Guido Harari, Holly Johnson, Lauren Laverne, Annie Lennox, Paul McCartney, Caitlin Moran, Frank Skinner and Ricky Wilde.

While Kate requested there was to be no photographing or filming during the evenings, many members of the audience have recorded the sound of the concert instead. Sound recordings from the audience exist from 10 of the 22 dates. On September 16 and 17, some seats were moved in order "to film the show for a DVD release", according to an e-mail to some fans who had bought tickets for these two shows. In 2016, the album Before The Dawn was released, with live recordings from the shows.

WATCHING THEM WITHOUT HER
Ben: Albert McIntosh
Dad: Bob Harms