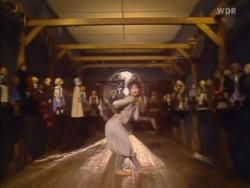 Bananas was a television programme on German channel WDR, broadcast between March 1981 and November 1984. The program consisted of in-studio performances of national and international artists, produced like music videos. Between the musical contributions, one or more sketches were given, played by Hans Herbert Böhrs, Herbert Fux, Gerd Leienbach, Olivia Pascal and Frank Zander. The performances of the singers and musicians, which were staged without the audience, were partly included in the nonsense-based concept with stage-building, costume-forming and trick-technological means: for instance, Depeche Mode performed 'See you' in the backdrop of a stall, taking the chickens present on the lap.

Kate Bush appeared in the show broadcast on 2 November 1982, with a lipsynched performance of Suspended In Gaffa amid a huge collection of giant marionettes.