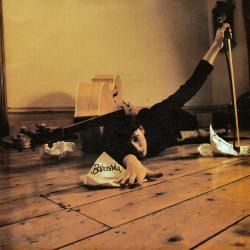 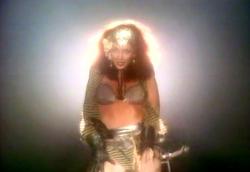 Still from the music video of 'Babooshka' 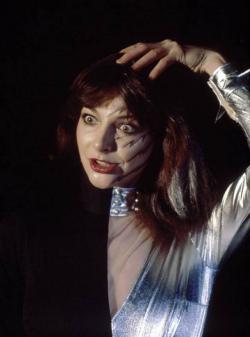 Song written by Kate Bush. Originally released as a single on 27 June 1980 and subsequently included on the album Never For Ever. According to Kate, the song chronicles a wife's desire to test her husband's loyalty. To do so, she takes on the pseudonym of Babooshka and sends notes to her husband in the guise of a younger woman - something which she fears is the opposite of how her husband currently sees her. In her bitterness and paranoia, Babooshka arranges to meet her husband, who is attracted to the character who reminds him of his wife in earlier times. The relationship is ruined only because of her own paranoia.

'Babooshka' was released as a 7" single in various territories. The B-side was Ran Tan Waltz.

There are two versions of 'Babooshka': the single version which fades out and the album version which segues into the next track, Delius (Song Of Summer). Two demo versions from 1977 have also surfaced and were released on various bootleg cd's.

The music video depicts Bush beside a double bass (contrabass) which symbolises the husband, wearing a black bodysuit and a veil in her role as the embittered wife. This changes into an extravagant, mythlike and rather sparse "Russian" costume as her alter-ego, Babooshka. An illustration by Chris Achilleos was the basis for the costume.

Kate performed 'Babooshka' in various European programmes, including Collaro (France), Countdown (Netherlands) and Rock Pop (Germany). Her performance of the song in a Dr. Hook television special remains the first, and is memorable for the costume she is wearing: on her the right side she resembles a staid Victorian lady in mourning dress; on the left side a glittering, liberated young woman in a silvery jumpsuit, with bright lightning-streaks painted down the left side of her face. Her figure is lit so that only the "repressed" side of her costume is visible during the verses of the song, and mainly the "free" side during the choruses.

'Babooshka' is about futile situations. The way in which we often ruin things for ourselves. (Kate Bush Club newsletter, September 1980)

Apparently it is grandmother, it's also a headdress that people wear. But when I wrote the song it was just a name that literally came into my mind, I've presumed I've got it from a fairy story I'd read when I was a child. And after having written the song a series of incredible coincidences happened where I'd turned on the television and there was Donald Swan singing about Babooshka. So I thought, "Well, there's got to be someone who's actually called Babooshka." So I was looking through Radio Times and there, another coincidence, there was an opera called Babooshka. Apparently she was the lady that the three kings went to see because the star stopped over her house and they thought "Jesus is in there".' So they went in and he wasn't. And they wouldn't let her come with them to find the baby and she spent the rest of her life looking for him and she never found him. And also a friend of mine had a cat called Babooshka. So these really extraordinary things that kept coming up when in fact it was just a name that came into my head at the time purely because it fitted. (Peter Powell interview, Radio 1 (UK), 11 October 1980)

I love the melody line of the bass guitar on this song. We got through a lot of boxes of broken crockery to get the right sound at the end - the canteen ladies were not impressed.

It was really a theme that has fascinated me for some time. It's based on a theme that is often used in folk songs, which is where the wife of the husband begins to feel that perhaps he's not faithful. And there's no real strength in her feelings, it's just more or less paranoia suspicions, and so she starts thinking that she's going to test him, just to see if he's faithful. So what she does is she gets herself a pseudonym, which happens to be Babooshka, and she sends him a letter. And he responds very well to the letter, because as he reads it, he recognises the wife that he had a couple of years ago, who was happy, in the letter. And so he likes it, and she decides to take it even further and get a meeting together to see how he reacts to this Babooshka lady instead of her. When he meets her, again because she is so similar to his wife, the one that he loves, he's very attracted to her. Of course she is very annoyed and the break in the song is just throwing the restaurant at him...  (...) The whole idea of the song is really the futility and the stupidness of humans and how by our own thinking, spinning around in our own ideas we come up with completely paranoid facts. So in her situation she was in fact suspicious of a man who was doing nothing wrong, he loved her very much indeed. Through her own suspicions and evil thoughts she's really ruining the relationship. (Countdown Australia, 1980)

She wanted to test her husband.
She knew exactly what to do:
A pseudonym to fool him.
She couldn't have made a worse move.

She wanted to take it further,
So she arranged a place to go,
To see if he
Would fall for her incognito.
And when he laid eyes on her,
He got the feeling they had met before.
Uncanny how she
Reminds him of his little lady,
Capacity to give him all he needs,
Just like his wife before she freezed on him,
Just like his wife when she was beautiful.
He shouted out, "I'm