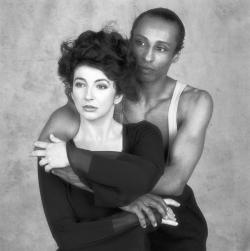 Stewart Avon-Arnold was born in London (UK) on 4 April 1955. Having initially trained as a dancer at The London School Of Contemporary Dance, Stewart Avon Arnold has gone on to become a highly successful choreographer. He started dancing professionally in the mid-1970's. He performed with The Tubes at Knebworth, and choreographed a piece that was performed at Sadlers Wells. A member of the Minority Arts Advisory Service, he later founded a dance troupe called The Dance Theatre of London with the late Gary Hurst.

He joined Kate's circle for the Tour Of Life in 1979. After this, he appeared in many of Kate's music videos, including a featured role in The Line, The Cross And The Curve. Avon-Arnold also provided backing vocals on the song Sat In Your Lap.

For the last fifteen years Stewart has been constantly involved in West End Shows, pop music videos and television series. He also finds time to teach intensive courses and master classes at leading schools throughout Europe, Scandinavia and Japan. The breadth of his knowledge of forms of dance, together with his unique talent and sensitivity, make Stewart a very powerful creative asset to every production.