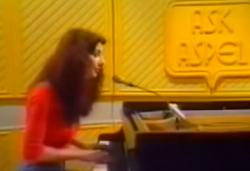 British television series produced by the BBC and hosted by Michael Aspel. The show first ran from 1970 until 1973. A second series ran from 1976 until 1981.

The format of the show was that viewers would write in asking to see repeats of their favourite clips from BBC programmes. The other function was a chat show, as Aspel would interview a guest. In the 5 September 1978, Kate Bush appeared for an interview. She performed the song Kashka From Baghdad, which was an interesting choice since the target audience was mostly young children.